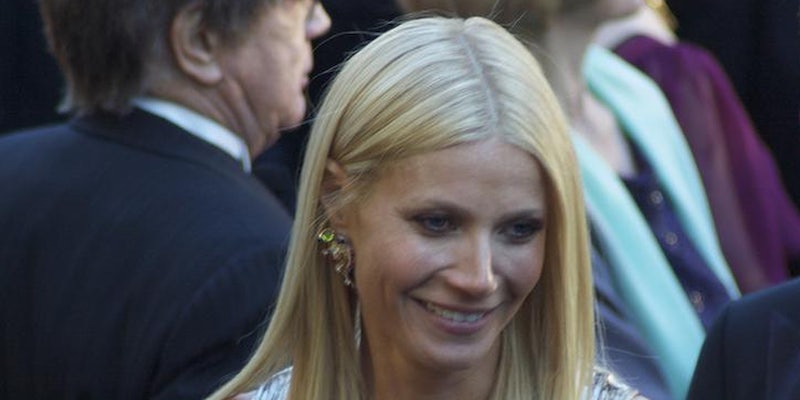 I was on food stamps, and I support Gwyneth Paltrow’s food stamp challenge

People are ridiculing the GOOP starlet for being elitist and out of touch. But they fail to understand what living on food stamps actually looks like.

Gwyneth Paltrow is at it again. Last week, the lifestyle icon tweeted that she would live on a $29 budget to raise awareness of world hunger in honor of Mario Batali’s #FoodBankNYCChallenge, in which people attempt to live on a food stamp budget for one week.

This is what $29 gets you at the grocery store—what families on SNAP (i.e. food stamps) have to live on for a week. pic.twitter.com/OZMPA3nxij

We're walking in their shoes to see how far we get. I nominate @RidingShotgunLA to do #FoodBankNYCChallenge & donate: http://t.co/eBEJ0hqEHG

Unsurprisingly, the Internet was enraged by Paltrow’s participation in the challenge. Many objected to what they perceived as the condescending nature of the stunt, referring to Paltrow as an out-of-touch elitist and “poverty tourist.” Others took issue with her food choices:

I love when Gwyneth Paltrow pretends she's a person.

So @GwynethPaltrow thinks this is what people on Food Stamps are buying? Talk about out of touch with reality. pic.twitter.com/EdhLIc2Aeg

Because Gwyneth Paltrow is a rich white woman, living off food stamps is probably not a choice she will ever have to make. It’s also true that the contents of her cart do not reflect the reality of a desperately poor person raising children in a food desert, so her food choices might seem absurd to us.

However, I would argue that if Gwyneth Paltrow lost all of her assets tomorrow and really did qualify for food stamps, she probably would use them to buy fresh fruits and vegetables.  I say this in good faith because as a privileged but broke grad student, I lived on food stamps, and the contents of Gwyneth’s carts weren’t all that different than what I’d normally buy.

I originally went on food stamps because I was one of those people who existed in an odd liminal zone of poverty. While I had a small income from my graduate school assistantship, it wasn’t enough to live on, and I was definitely poor enough to qualify for food stamps. Yet I was still technically what I would call a “privileged poor person”: I was white, I didn’t have children to support, I was in graduate school, and like Paltrow, I was certainly accustomed to eating kale.

I was technically what I would call a “privileged poor person”: I was white, I didn’t have children to support, I was in graduate school, and I was certainly accustomed to eating kale.

Graduate school wasn’t the first time in my life that I was on food stamps. While I was growing up, my single mom used food stamps for many years. But my mother always kept our house stocked with fresh fruits and vegetables, because they were actually cheaper at our supermarket than buying processed food.

I’ve drifted back and forth between middle class and borderline poverty my entire adult life. In lean times, my pride kept me from applying for food stamps, which led to me accumulating a mountain of more socially acceptable credit card debt instead. When I actually did have a steady job, paying off that debt meant I never had enough to put aside for savings to get me through lean times. I’m in my mid-thirties, and I don’t know what it feels like to have savings, let alone a retirement account.

I finally decided to go back on food stamps in graduate school after a friend saw me struggling and told me to apply for SNAP. By doing so, he essentially gave me permission to overcome my guilt and shame long enough to accept help. But because I had a job, it was not as if I would starve if I did not receive SNAP. I used SNAP the way it was intended: as a supplement to my already-existing, albeit meager, food budget. It let me buy the nutritious food I might not otherwise be able to afford without charging it to my credit card and adding to my mountain of debt. In short, I used my SNAP to buy things like kale, salmon and greek yogurt—which is exactly the kind of stuff Gwyneth Paltrow would buy.

But even though I was on food stamps, I still shopped at a natrual foods co-op two blocks away from my house, because I was too broke to afford a car and there were no public transit options that would take me to the big box grocery store two miles away. To use my benefits at the co-op, I had to verbally announce that I was paying with food stamps to the cashier, within earshot of other customers and employees. I got strange looks from the affluent white people who typically shopped at the co-op. Like Paltrow’s critics, they’d take a visual inventory of my grocery basket and silently assess what I was buying with my food stamps. I could tell exactly what they were thinking: either I looked too middle-class to be using food stamps, or I was dragging my unsightly poverty into their bubble of kombucha and organic tofu.

What I learned from my experience in grad school is that there are many more “privileged poor” on food stamps than people realize. We like to pretend we’re not actually poor, that because we’re white and educated we’re too good for food stamps. We’re students, highly skilled unemployed and underemployed people, recent graduates, unpaid interns. We’re not necessarily supporting families, but we don’t necessarily have rich parents who can help us out, either. We “should” be able to make good money according to the expectations of society, but for whatever reason we do not. You don’t see us because society doesn’t want to acknowledge that poverty is so pervasive, or because we simply don’t want to be seen in the first place.

What I learned from my experience in grad school is that there are many more “privileged poor” on food stamps than people realize.

I no longer use SNAP benefits, so I’d never pretend that I know the same hardship as the people who rely on SNAP for 100 percent of their food budget. My story is nothing like theirs. However, I am not going to pretend that I’ve never known poverty, or that I’ve never felt ashamed of being poor.

One of the darker realities of SNAP and social benefits is that they are really designed to keep recipients in poverty—not only from an economic standpoint, but from a social standpoint as well. While using food stamps, I knew that I would have to turn down freelance writing gigs because those occasional little bits of income would cause me to lose my benefits, putting me deeper in the hole. These low-paying, inconsistent opportunities for career advancement would actually make me more broke if I accepted them.

We’d like to mock Gwyneth Paltrow for buying seven limes with her food stamps, but the fact is that a modicum of luxury—and by luxury, I mean the ability to buy fresh fruits and vegetables, up to and including seven limes—is critical to human happiness and survival. It’s also pretty much a requirement for any aspiration of upward mobility.

I believe that shaming someone for using their food stamps to buy limes and kale is pretty much the same as shaming a person for using food stamps while simultaneously owning an iPhone. You’re basically shaming them for failing to perform your conception of poverty correctly, for daring to enjoy anything that’s associated with a decent quality of life.

Even though I was on food stamps as a child, my mom still spent money on European cheeses and paperback books. These little luxuries enabled her to stay sane while she eked out a meager living as a house cleaner and supported two kids. Who would begrudge a hardworking single mom these small pleasures that make a hard life tolerable?

By posting the contents of her food stamps on cart, and by being, well, Gwyneth Paltrow, Paltrow obviously opened herself up to public scrutiny. But the truth is, the judgment she faced for the choices she made with her food stamps is no different from the judgment people on food stamps face from the general population. The implication that low-calorie, nutritionally dense food should be off-limits to poor people is offensive to me. For people who dwell in the grey area between abject poverty and the middle class, Gwyneth’s shopping basket might actually make a lot of sense.

By slamming Paltrow’s project and her shopping choices as out-of-touch and “unrealistic,” people are unwittingly playing into the same tired old tropes used to shame and police the personal choices made by people who use food stamps. And those people might not resemble what you think a “poor person” looks like. In fact, they might be living right next door to you.