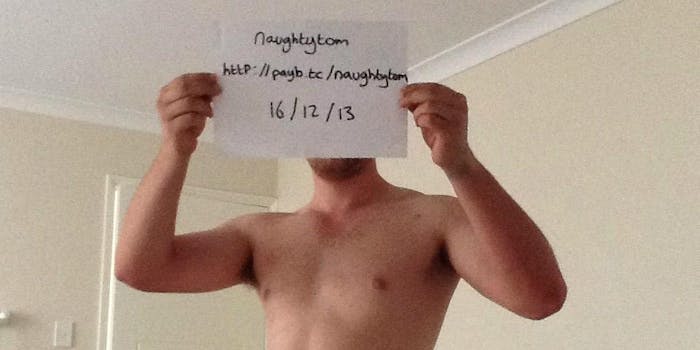 Women aren't the only ones getting naked online in exchange for digital currency.

On Reddit and on the site Stripcoin.com, entrepreneurs of both sexes can get naked and take sexy requests in exchange for digital money from patrons. But if you’re considering stripping for Bitcoin, it pays to be a woman.

On Reddit, r/GuysGoneBitcoin is much less popular than its female counterpart. So far, it has just two pages of posts where men promote their Bitcoin accounts and ask for donations. Some are working their way through college or law school, others are freelance writers with unsteady incomes.

Bitcoin is a hard-to-trace digital currency created in 2009. For years, it was mostly spent on the Deep Web, in black markets selling drugs and firearms. It can now be used to purchase food and clothing, tip camgirls, and pay for features on OkCupid, Reddit and WordPress.

Many women in r/GirlsGoneBitcoin use their payments to purchase stockings or other fetish accoutrements. LadyBytes, the first woman to participate in the subreddit when it was new, has received 38 transactions for her stripping services. Unlike r/gonewild, where women undress presumably for free, r/GirlsGoneBitcoin ladies were getting paid to work for unseen clients. A strip club without the risk, or grossness of seeing who’s looking at your naked body.

Now the subreddit’s got its Magic Mike equivalent.

Many of the “guys gone Bitcoin” proclaim to be satisfying the ladies of Reddit by stripping for bitcoins, though it seems clear most of the subreddit’s members are gay men. The few that do comment have post histories that reveal them to be men interested in other men. (Not having to see your clients is probably why many of the dudes choose to address “ladies” in their posts, even if they suspect it’s mainly men checking them out.)

After almost nine months, r/GuysGoneBitcoin only has two pages of content. Sometimes it goes months in radio silence.

The site’s sidebar tries to make it easier to tip the posters: “Visit StripCoin.com for all the details on how to create a wallet, find your Bitcoin address, and post your picture to become verified. You can also find resources on how to buy, sell, and spend your Bitcoin.”

In the past two weeks, business has picked up a bit, with more posts from naked guys. However, the comments are still slow. Most threads have zero. Some just have one comment from the mod, asking for verification. Others have one from a lone admirer.

It’s certainly possible for a guy to “go Bitcoin” on Reddit, but so far it’s slow goings.