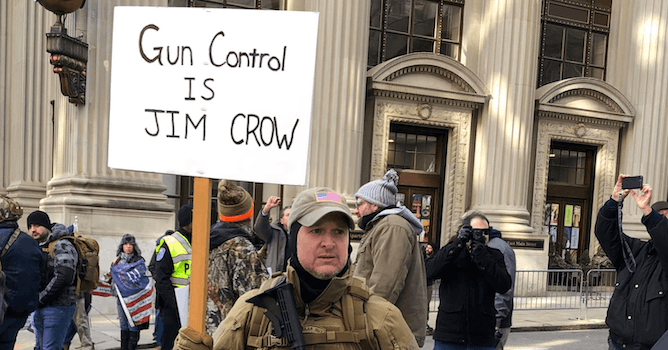 The crowd outside the gates, the armed ralliers on the street pic.twitter.com/DgpJAQwoZf

Virginia Gov. Ralph Northam declared a state of emergency last Wednesday over “threats of violence” at the rally, an attempt to head off a repeat of the violence that occurred at the 2017 white supremacist rally in Charlottesville, which led to the death of an anti-fascism protester, Heather Heyer.

Northam noted “credible” law enforcement intelligence that various militia groups and hate groups planned to attend the rally, possibly for the purposes of “violence, rioting, and insurrection.” In fact, three suspected white supremacists were arrested by FBI agents, after months of surveillance, ahead of the rally.

On Friday, President Trump tweeted out what could be perceived as a rallying cry:

Your 2nd Amendment is under very serious attack in the Great Commonwealth of Virginia. That’s what happens when you vote for Democrats, they will take your guns away. Republicans will win Virginia in 2020. Thank you Dems!

Northam temporarily banned all weapons on the grounds of the capitol in Richmond. Many activists worried that the ban would create an impetus for even more militia members to show up at the capitol in full force–some even from out of state.

A great number of the protesters were documented by Jonathan Myerson Katz, who was on the ground in Richmond

I asked the guy with this militia why he was holding a Hong Kong flag. He said, “It only seems fair. They’re holding ours.” pic.twitter.com/4uZ4BnakCj

Show up they did, outfitted as if the apocalypse is near, with ill-considered signs. Flags teemed from the crowd, including American flags, Second Amendment flags, “Don’t Tread on Me” flags, and various militia symbols.

Many tried to make light of their gun activism:

In addition to quite a few people being armed with rifles in Richmond, there's also quite a few Gov. Northam yearbook pictures on signs. pic.twitter.com/v02m4P0gWU

Mostly, though, it’s just a lot of men trying to play soldier in a country where no one poses a threat to them:

what you see in the mirror vs what everyone else sees pic.twitter.com/Cyqhenclgo

FWIW a lot of these militia folks are violating mask laws here pic.twitter.com/f9zDIMSJz9

One of the worst signs featured a dangerously false and disrespectful equivalency, especially with today being the anniversary of Dr. Martin Luther King’s birthday:

Gun control is not Jim Crow, no matter what the Sharpie says.