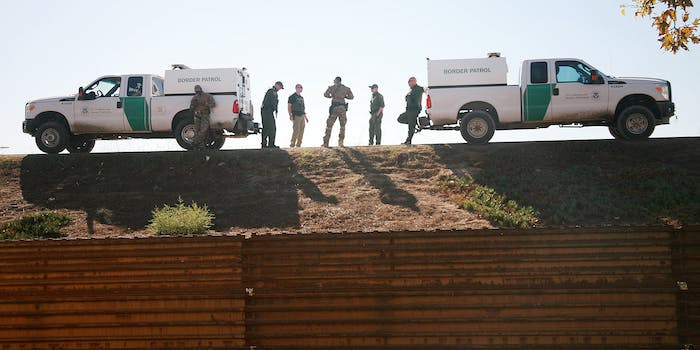 The child died following high fever and a cardiac arrest.

A 7-year-old Guatemalan child died in U.S. Customs and Border Protection (CBP) custody in New Mexico last Friday after suffering from seizures and a cardiac arrest. A White House spokesperson on Friday morning said that the Trump administration takes no blame for the death.

The child, whose name has not been disclosed, had crossed into the United States with her father, who self-reported the two of them to authorities, the Washington Post reports.

They were taken into custody in a location south of Lordsburg, New Mexico, last Thursday evening, and were a part of a group of more than 150 people who were turning themselves in.

The next morning, around 6:30am, the child began to have seizures and was taken to a children’s hospital in El Paso, Texas, where she went into cardiac arrest. CBP has told the Post in a statement that she was revived at first, but did not recover.

When emergency responders initially arrived at the facility to check her after her seizures, they recorded her temperature at 105.7 degrees. The child had not eaten or had anything to drink for several days, CBP said in a statement to the Post, and the diagnosis says she died of septic shock, fever, and dehydration.

Twitter users are calling CBP out for its lack of action:

CBP statement on the death of the 7 year-old girl is bullshit. They did not “take every possible step”. They obviously did not take her temperature. Hospitals can treat hyperthermia *before* the patient starts seizing because her brain is being boiled. https://t.co/nOgMWbmCBD pic.twitter.com/JBf9DRpCvR

Good job @CBP . I know a lot of g/parents work for your agency.

A lot of “Christians,” too.

How do you all justify killing a 7 year old by starvation & dehydration? It was okay because she wasn’t white? That it?

The nazis at #Auschwitz would be proud of your work here. https://t.co/GVSjZPgmPm

The death of this young girl is on our hands.

She died on our watch.

She died in our custody.@CBP has a duty to safeguard. They have failed. https://t.co/qVRHe1ZLM5

After eight hours in US custody, the child began having seizures. Her body temperature was 105.7 degrees. Did CBP give her any water?
https://t.co/OFhqpElCp5

The child and her father were crossing the border without documentation through Mexico, and the Post reports the father is still waiting in El Paso, where authorities might run an autopsy.

Guatemala is one of the Central American countries that’s seen a spike in refugees in the last few years, according to UNHCR. A January report by the organization lists Guatemalans in need under the protection of several categories of human rights abuse. Between 2013 and 2016, the number of Guatemalan refugees in the United States doubled.

The ACLU in a statement blamed “lack of accountability” and a “culture of cruelty” in CBP for the death, noting that the amount of time it took for the story to come out proves the impunity with which the organization operates.

Aura Bogado, an immigration journalist with Reveal, shared a photo by photographer John Moore, that shows that the facilities have “safe drinking water” on the toilets:

Here's a cropped @jbmoorephoto from a hielera. This is the water people are forced to drink. It's grey and it's disgusting. It routinely makes people sick. There isn't even a place to dry your hands after you wash them. Everything is full of fecal matter. pic.twitter.com/VrdqjiBO1P

The death of the child rounds up a year scrutinizing migrant facilities at the border, following the current administration’s policy of separating children at the border in June, to using tear gas and rubber bullets on people from migrant caravans in November.