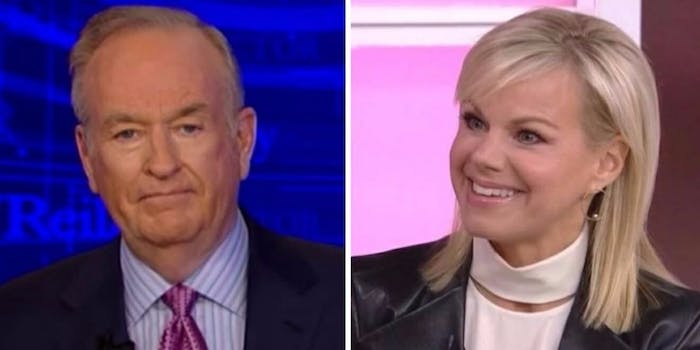 With the New York Times reporting that Bill O’Reilly paid $32 million to a former Fox News analyst to settle sexual harassment claims against him, O’Reilly tweeted Saturday that he had been maligned in the press.

But former Fox News host Gretchen Carlson, the woman who was the first to expose the harassment culture at Fox News with her lawsuit against Roger Ailes, had the snappiest of comebacks against him.

Here’s how O’Reilly responded to the report that he had paid $32 million to Lis Wiehl, on top of the $13 million to five women that ultimately got him fired at Fox News.

When times get tough, good people accept the pain and get through it. I hope you will all read what we've posted on https://t.co/rryWmyXe7C.

My investigative team has done a superb job in exposing the lies and smear. I will speak with you on Monday.

Nobody pays $32m for false allegations – nobody https://t.co/qB3njcHHuy

No need to wait for Monday. Another right wing conspiracy? Women are getting brave #truth #Befiercebook #metoo https://t.co/c9LSAHs9Y1

Carlson said she was fired from Fox after she denied Ailes’ sexual advances. That led to Ailes’ departure from Fox News, and Carlson eventually reached a $20 million settlement with the network. The Times, meanwhile, reported that even though Fox knew about O’Reilly’s payout to Wiehl, it gave him a four-year contract extension worth $25 million per year a month later.