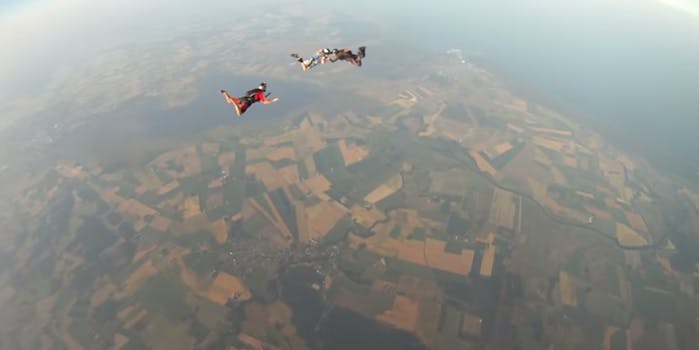 Now you don't have to skydive in real life.

Have you ever wondered what it would look like to fall, spinning rapidly, down to Earth? Thanks to a GoPro camera that fell off its skydiving owner’s helmet, you can see the nerve-wracking descent from the safety of your home.

After Kristoffer Orstadius’s father found a GoPro in a meadow in Kristianstad, Sweden, Orstadius discovered that the camera had recorded its fateful plunge to Earth. In an attempt to reunite the hardy device with its owner, Orstadius posted the footage on YouTube.

“The memory card is intact,” he wrote. “This is the last film.”

Orstadius eventually located the camera’s owner, a parachutist in nearby Everöd. Thanks to its temporary disappearance, however, the rest of us got to enjoy a remarkable—and somewhat disorienting—view of our planet from high above.