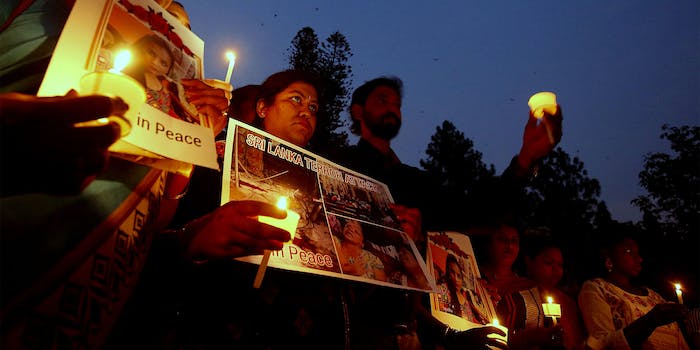 A lot fewer people were searching for information about the Sri Lanka bombings in the aftermath.

The number of Google searches for Notre Dame was between five to nine times more than that of Sri Lanka in the 24 hours after each respective tragedy, according to Google Trends analyzed by Al Jazeera.

The Notre Dame fire ravaged the roof of the more than 800-year-old cathedral on April 15, putting a dent on the Paris skyline. While it was an emotional moment for both locals and tourists alike who mourned the loss of the historic structure, there were no human casualties. In fact, even the 180,000 bees in the cathedral also survived.

The terrorist attacks in Sri Lanka, less than a week later, took 290 lives, a death toll that had climbed to 321 by Tuesday. The bombings, claimed by an Islamist militant group reportedly in retaliation for the Christchurch attack, took place in nine different locations, including three churches, in the island nation on Easter.

The world mourned both tragedies, but the extent of each was different. As Al Jazeera’s search shows, it was only in Sri Lanka’s neighboring countries—India, the United Arab Emirates, and Indonesia—where the searches for Sri Lanka were higher than that for Notre Dame during the past week.

An Al Jazeera data analyst claims this is expected of neighboring states, attributing it to a “closer to home” sentiment. Countries such as India, Pakistan, Kenya, Nigeria, and the UAE recorded more searches for “Sri Lanka attack” while largely Western countries, mainly those in Europe, recorded higher searches for the Notre Dame fire (among those in the former group, Kenya and Nigeria continue to be under threats of Islamist attacks).

In the aftermath of the fire, searches such as “money raised for Notre Dame” also peaked, while similar searches, such as “funds for Sri Lanka” recorded poorly after the tragedy there. This is not surprising, considering people from around the world pledged billions for the rehabilitation of the cathedral after the fire. While it was a moving gesture, it led to a debate about how world leaders were responding to a crisis without any casualties, when money could be directed to crises affecting living people and families of those impacted by tragedies.

In fact, many shared their grievances about how President Trump’s offering of aid to the restoration of Notre Dame compared to his negligence toward similar crises, like the three Black churches in Louisiana that had also recently burned to the ground.

The Google searches following the bombings in Sri Lanka—the worst violence the country has seen since it ended a decades-long civil war 10 years ago—are a testament to how glaringly different the weight of the tragedies are depending on which part of the world they belong to.