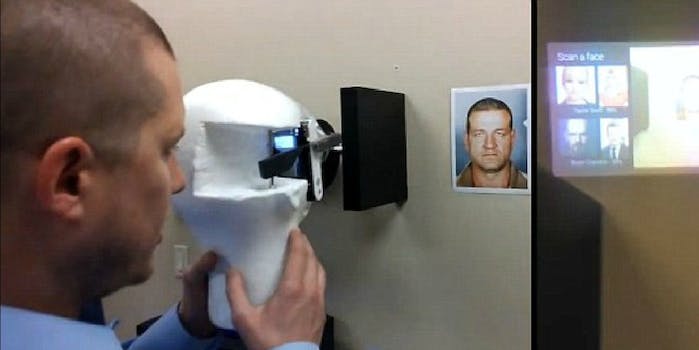 Background check your date with this Google Glass app

Facebook-stalking your blind date is about to get so much easier.

Looking for love in the digital age? A new facial recognition app is about to make Facebook-stalking a whole lot easier.

NameTag, which will release soon for Android, iOS and Google Glass, allows people to vet their dates just by capturing an image of their face (in the case of Google Glass, that could mean simply glancing at a person). The app seems like a real-life version of the optical recognition scanner from Minority Report, except instead of determining whether you’re an enemy of the state, this app can see how many stars you gave Couples’ Retreat on Netflix, or who your date was at your cousin’s bar mitzvah.

Basically, the app works like this: You take a photo of a person’s face, or look at them on Google Glass, and a few seconds later it’ll show their complete history, including their name, occupation, social media profiles, and any criminal record they might have. It does this by cross-referencing the image with more than two million entries in the app’s database, as well as hundreds of thousands of entries in criminal databases like the National Sex Offender registry.

Although the Philip Dick-esque aspects of NameTag may strike some privacy advocates as overly invasive and unsavory, creator Kevin Alan Tussy believes it could potentially revolutionize dating, both online and off.

“I believe that this will make online dating and offline social interactions much safer and give us a far better understanding of the people around us,” Tussy told the Daily Mail.

“It’s much easier to meet interesting new people when we can simply look at someone, see their Facebook, review their LinkedIn page or maybe even see their dating site profile, [rather than] interacting with people blindly or not interacting at all.”

NameTag is available on Glass for beta testers, so they’re clearly trying to work out the kinks a bit. Google has not yet officially approved the app, presumably due to privacy concerns.

The company’s promotinal video for the app certainly makes it look like it works. In the clip, the app identifies Kanye West, Taylor Swift, Bryan Cranston, and a sex offender named Stanley Kanakaris, who has a criminal record for sexually abusing a 13 year-old.

What we don’t know from the demo, however, is how well the app works when the subjects aren’t celebrities, sex offenders, or celebrity sex offenders. Tussy notes that there are more than 2.5 million entries in NameTag’s database, so if the app is approved for general use it’s not unlikely you’ll get a hit.

Still, while NameTag is an interesting concept, it seems like something that would work better in theory than in practice, especially in the case of the Google Glass app. A potential love interest might be a little taken aback, for instance, when you stare at them for 20 seconds, just to see how many endorsements they got on LinkedIn. More importantly: Who would go home with someone wearing Google Glass in the first place?