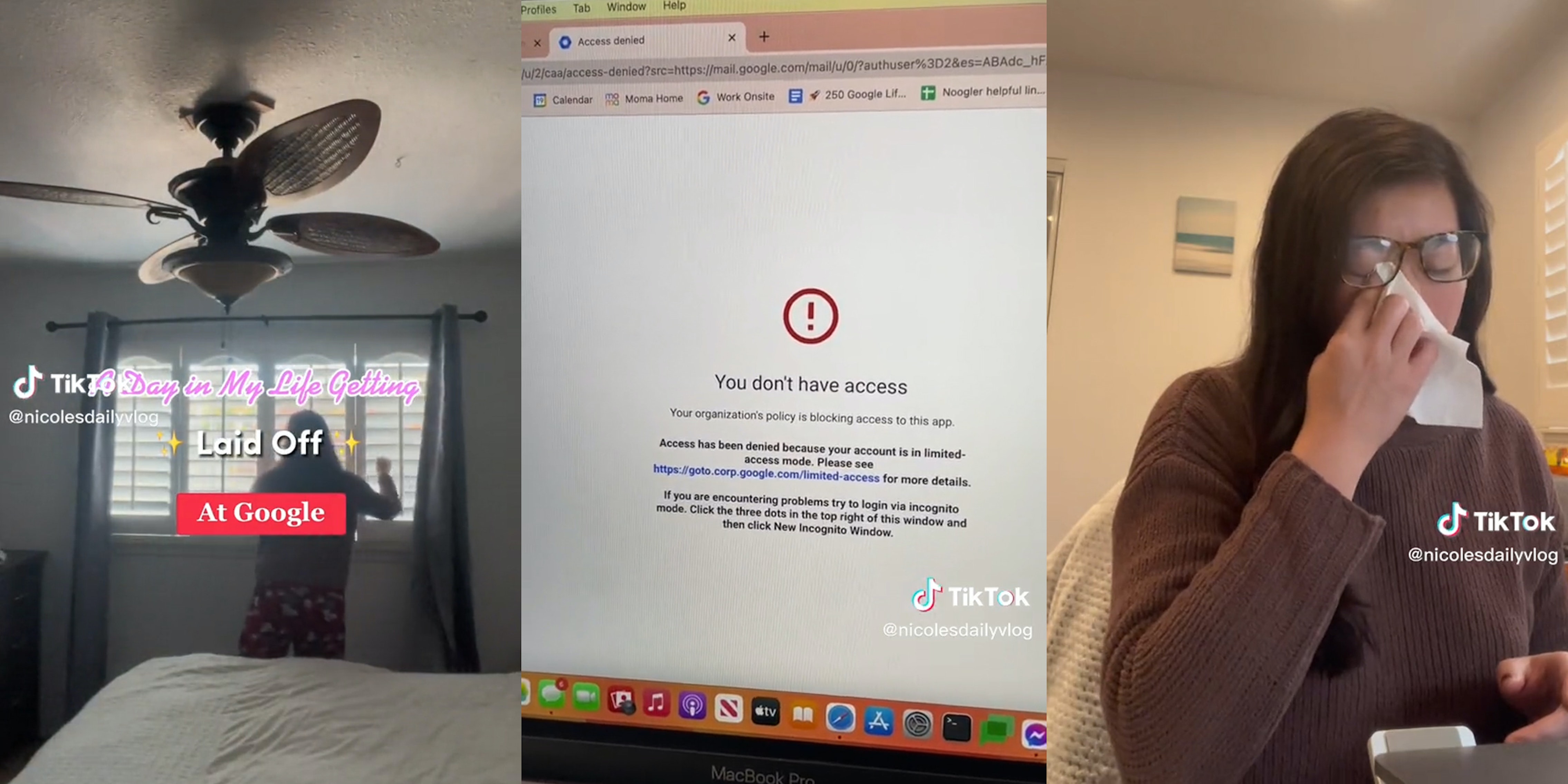 ‘It felt really random’: Google employee vlogs day she got laid off, says she was blindsided

'It just felt like a really bad game of Russian roulette.'

The recent spat of tech layoffs seems to have caught everyone off-guard.

Now, a user on TikTok has gone viral after sharing their experience on the day they were laid off from Google.

According to TikTok user Nicole (@nicolesdailyvlog), she, her coworkers, and her boss were totally blindsided by the announcement, claiming that the layoffs were not based on performance and “felt really random.”

“I think the worst part is, it seems like no one was consulted on this decision,” Nicole says. “It just felt like a really bad game of Russian roulette, and there was no consistency around who was let go.”

The video currently has over 4.2 million views.

In recounting her experience, Nicole says she found out about the announcement after her boss asked her to call them. The boss then instructed Nicole to check the news, at which point she discovered she was part of the current rash of layoffs.

She then went to her computer, only to find out that she had already been locked out of all her Google accounts.

Upon checking LinkedIn, Nicole says she was greeted with many similar announcements from friends and coworkers at Google and various other tech companies.

Nicole closes her video by saying that, in order to feel better about the situation, she utilized a Disneyland season pass she owns to go, in her words, “eat my feelings.”

Still, Nicole appears to be keeping a positive attitude about the experience.

“The Google layoffs were not how I expected to start off 2023, but I know it’s only up from here,” she wrote in the video’s caption.

Many users in the comments shared similar experiences.

“I was working for Disney+ and they did this exact thing to me. No warning,” alleged a user.

“This happened to me. My company gave us a days notice and it took me 3 months to find a new job,” recalled another. “Hope everything works out for you.”

“Girl, I’m going through the same thing at another big F500 tech company myself,” claimed a third. “I was completely blindsided.”

“…went through this at Meta in November. Definitely stay off of LinkedIn for a couple days. I know the first days were a blur for me,” wrote a further TikToker.

“You are going to do amazing. unprofessional how they do these things and so inhumane,” offered a commenter. “This community is here for you!”

“I’m so sorry for you, but better things will come your way,” echoed a second.

The Daily Dot reached out to Nicole via email.