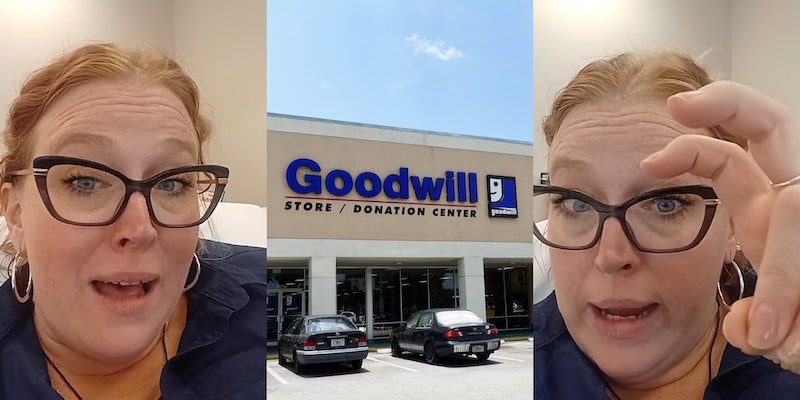 Goodwill is once again under fire for the alleged treatment of those who work for it.

In a TikTok, user Janice (@dirrrtygrrl1) says she’s worked at an assisted living facility that had several people with disabilities enrolled in a Goodwill internship program.

She claims they were paid under 1$ an hour and speaks about the work conditions they allegedly endured. “One person was prone to having ‘accidents’ and instead of letting the person go home, they would give them a ‘choice’, mind you, these adults have special needs, so [the choice was] to stay and continue to work for under a dollar an hour and give them used underwear to wear,” she says.

@dirrrtygrrl1 #stitch with @greygalaxie Goodwill is not so good for employees. #fyp #Goodwill #underadollar #hourlypay ♬ Love You So – The King Khan & BBQ Show

The video, which was posted on Sept. 3, amassed over 760,000 views and sparked a discussion in the comments.

Commenters were outraged and questioned how Goodwill could get away with paying only $1 an hour. According to the Colorado Springs Business Journal, the Fair Wage Act made it possible for Goodwill to pay some of its workers with disabilities $1.44 an hour.

One commenter said: “I had to do a double take. You said under $1 an hour? How is that legal with minimum wage?”

“How do they get away only paying a $1,” another commenter questioned.

In a follow-up, Janice claims that the workers with disabilities are classified as interns, as part of Goodwill’s rehabilitation program. She also says that Supplemental Security Income (SSI) recipients aren’t allowed to have more than a certain amount of money in their bank account. According to the U.S. Social Security Administration, to get SSI, one’s countable resources must not be worth more than $2,000 for an individual or $3,000 for a couple.

She says, “Goodwill feels that by paying them anything at all they are giving them a meaningful purpose to get up every day and to do something.”

She then circles back to the person who was allegedly given used underwear: “So when she came back home, she wasn’t even properly cleaned. That is not worth a dollar an hour, or under. That’s not worth 100$ an hour to work that way.”

Finally, she concludes: “These adults deserve to have dignity and grace.”

Viewers once again went to the comments section to express their outrage. “Not donating there anymore and certainly not buying from there anymore,” one commenter shared.

Update 12:57pm CT, Sept. 14: A spokesperson for Goodwill told the Daily Dot the following in a statement: “The safety, privacy and well-being of our employees is at the forefront of everything we do. When anyone shops at a local Goodwill store, they are helping someone in their community receive help with career navigation, skills training, job placement and other community-based services to ensure they are stable both at home and in the workplace. We thank our employees, donors and patrons for their ongoing support of our mission.”

The Daily Dot has reached out to @dirrrtygrrl1 via TikTok comment.