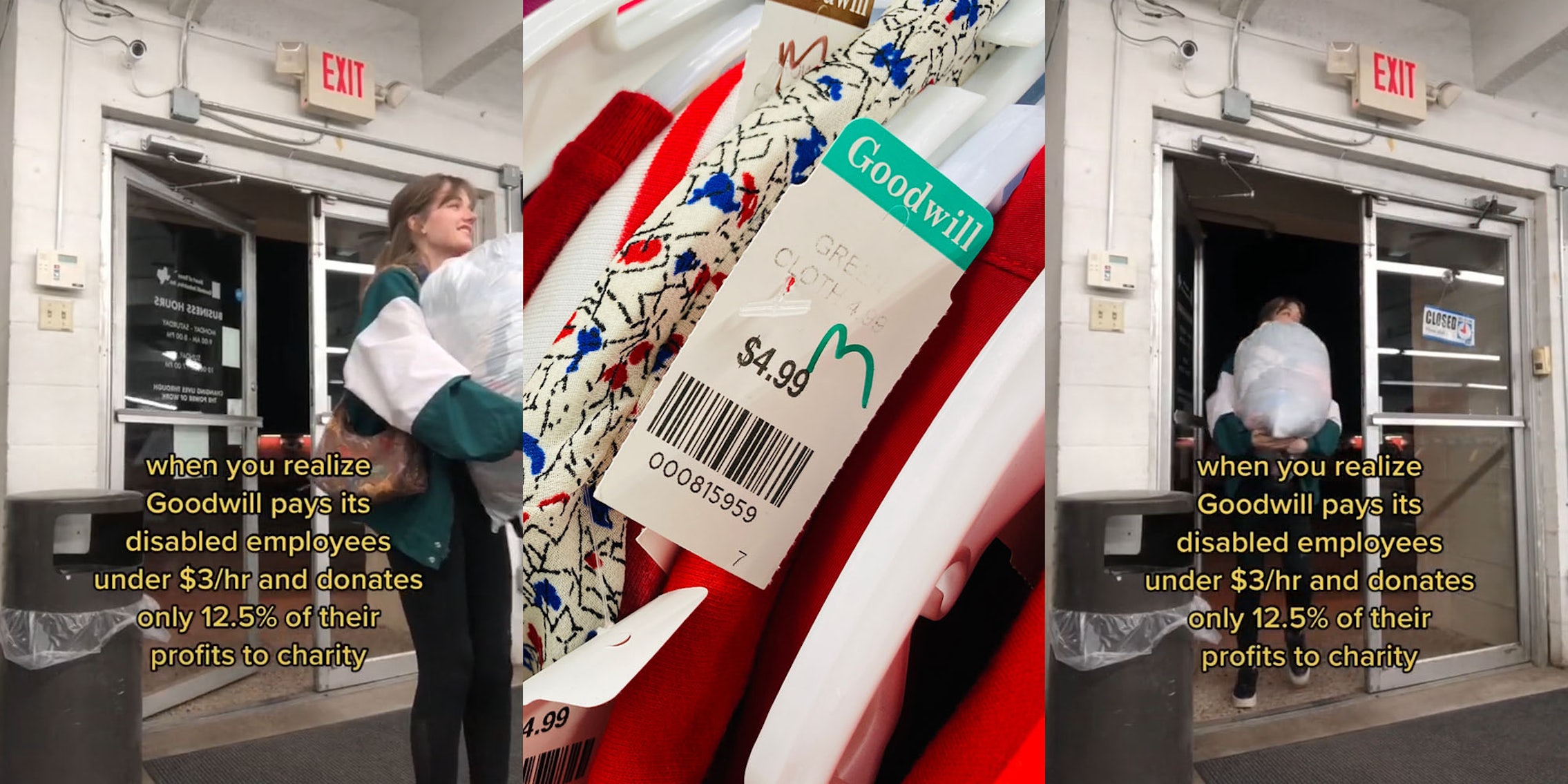 ‘Hands down the worst place i’ve ever worked’: TikToker’s video on ‘why you shouldn’t donate to Goodwill’ has workers chiming in

'When you realize Goodwill pays its disabled employees under $3/hr.'

A TikToker went viral this week after calling out resale chain Goodwill for its alleged business practices.

The TikTok, posted by user Lana (@bodemia), shows her exiting the store, with text overlaying the video explaining her aversion to shopping there and donating her clothes to the chain. The video has sparked intense discussion and debate, with many alleged former Goodwill employees chiming in to share their experiences working for the company.

“When you realize Goodwill pays its disabled employees under $3/hr and donates only 12.5% of their profits to charity,” Lana wrote in the text overlaying the video.

A provision in the Fair Labor Standard Act (FLSA) of 1938 gives employers the right to pay employees with disabilities less than minimum wage, per Forbes. An article in the Colorado Springs Business Journal notes that, while Goodwill states that a large amount of its workers with disabilities are paid above the minimum wage, some make as little as $1.44 per hour.

As for the donation claims, this appears to be false. CharityWatch notes that Goodwill spends 87% of its budget on charitable programs. These include “job training, employment placement services and other community-based programs for people who have disabilities, lack education or job experience, or face employment challenges,” per Snopes.

Still, there was enough correct information in the original TikTok to set users off, with many commenters sharing their own Goodwill employment experiences.

“I worked for goodwill for a brief time last year and it was hands down the worst place i’ve ever worked,” one user claimed.

“I worked at [Goodwill}…My boss would rather throw away hundreds of good shoes than lower the prices,” a second alleged. “So much went to waste when it could’ve gone to people.”

“I work at Goodwill currently. The amount of stuff that is thrown away in the compactor just because it’s not deemed ‘sellable’ is very concerning,” another alleged.

Instead of donating clothing to Goodwill, many users suggested alternatives.

“Dont donate to thrift stores cuz its just gonna be scalped,” a commenter urged. “Donate it to shelters who are actually gonna use your donations.”

“ALWAYS donate to LOCAL thrift stores. Our local humane society has one and they appreciate the donations so much,” another pleaded.

Furthermore, many users reminded commenters that legally low wages have been a long-time complaint of the disability community.

“Everybody surprised like the disabled community hasn’t been talking about wage inequality for decades,” one user wrote.