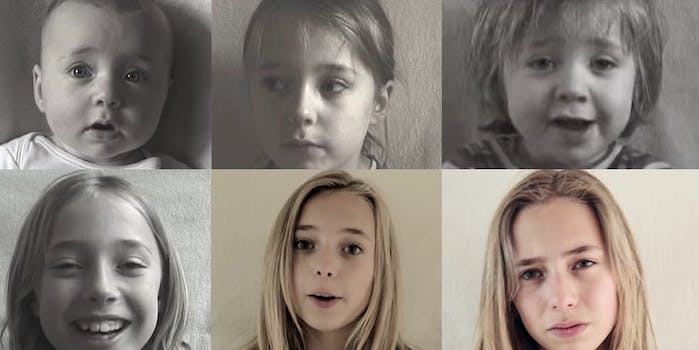 What it looks like to age 14 years in 4 minutes

Watch this Dutch girl's life fly by before your eyes.

Hofmeester’s short films are composed of hundreds of video clips of children aging from infancy to their early teens. They’re stunning works of art that capture time’s gradual march through intimate details.

His latest film is a continuation of one from 2012 featuring his daughter Lotte. In 2012, the film only captured his daughter through age 12. The latest clip extends through to age 14.

His Vimeo clip from 2012 collected 3.7 million views in a week and captured the attention of the Los Angeles Times.

“We found that the longer amount of time that the time lapse shows, the more views those videos are producing,” Hofmeester told the Times. “And watching a baby go from 0 to 12—that’s a huge amount of time.”

“Portrait of Lotte: 0-14 years” thankfully lasts just over four minutes. Visit Hofmeester’s YouTube channel to see other surreal videos and time-lapse portraits, including this one called “Portrait of Vince: 0-11 years.”