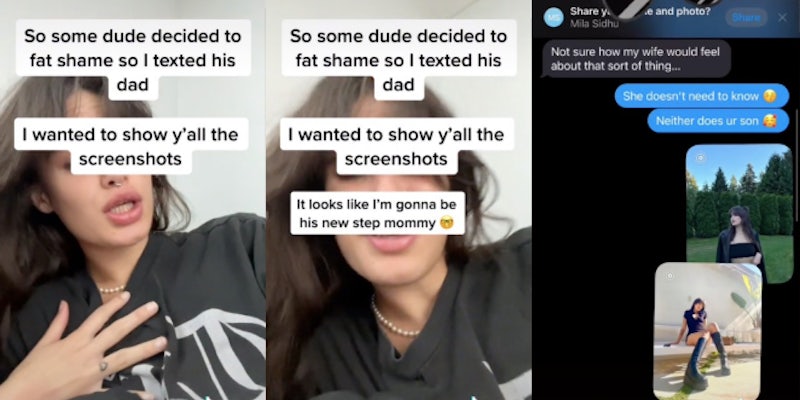 ‘Looks like I’m gonna be his new step mommy’: Guy fat-shames girl—so she texts his dad

'I would love this if he wasn't married.'

A woman went viral on TikTok for revealing screenshots of herself texting a guy’s father after he fat-shamed her.

The 15-second clip features @milareallysings as she says in overlay text, “So some dude decided to fat shame so I texted his dad. I wanted to show y’all the screenshots.” Before revealing the screenshots, the overlay reads, “it looks like I’m gonna be his new step mommy.” The screen shifts to screenshots between the TikToker and the guy’s father. Initially, the father was confused about who she was. Shortly, they begin flirting, revealing “his wife wouldn’t like this” but continuing flirting, making plans to see each other.

In the comments section, @milareallysings defended herself, writing, “Let me just clarify something, I would never homewreck a marriage. I never intended to actually meet him. I was proving a point to his son.”

The video racked up over 144,000 views as of Friday, with many people praising @milareallysings for reaching out to the guy’s father.

“I’m proud of you for this!! Who cares he’s married. His sons disrespectful and clearly he doesn’t care if he’s married! Props to you Queen!!” one viewer praised.

“If the man replied to you, he’s definitely already messing with other women. You helping the wife if you expose him & get back at the son too,” a second agreed.

“Idgaf what anyone thinks. You’re my hero slay bbg,” a third applauded.

However, @milacanreallysing was met with backlash with many accusing her of being a “homewrecker” for flirting with a married man.

“Everyone just loves a homewrecker and disgusting man,” one person wrote.

“Being a home wrecker isn’t cute,” a second concurred.

“nah because that’s a married man,” a third said.

“I would love this if he wasn’t married,” a fourth commented.

Others felt bad for the wife.

“I wanna support this but I also feel bad for the wife she didn’t do anything,” one stated.

“All of you thinking this is cute wouldnt like it if you were the wife. This is sad not a slay,” a second said,

In the comments, @milacanreallysing shared how this was supposed to be a joke.

In a follow-up video, @milacanreallysing posted her response to one of the comments about disagreeing with what she did because the guy’s father was married. @milaresponded with mouthing, “Here me out, I’m not a bad guy. OK, perhaps I’m kind of a bad guy.”

The Daily Dot reached out to @milacanreallysing via TikTok comment.