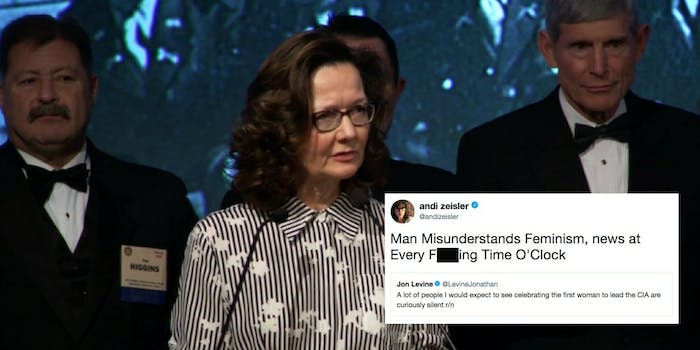 Sorry, but torture is not a cornerstone of feminism.

CIA Deputy Director Gina Haspel is slated to become the first woman to lead the CIA, a huge victory for feminism and women underrepresented in the torture industry!

At least, that’s the kind of celebrating that conservatives expected from brazen feminists after Haspel’s promotion.

Haspel’s track record is significantly less than “less than perfect”—it’s downright murderous. For example, prior to Trump bringing Haspel on as deputy director, she ran the CIA’s first overseas detention site in Thailand, where detainees were waterboarded incessantly, one to the point of having to be resuscitated and losing sight, according to the New Yorker. Haspel’s name was even on the firing orders for recordings of torture sessions to be destroyed.

But, you know, being a woman, other women, and especially feminists, should be overjoyed at the thought of someone like Haspel, who, again, is a woman, leading the CIA. A torturous woman, yes. But a woman, nonetheless!

Across Twitter, men emboldened in their vindication of proving feminists as hypocrites pointed out that women weren’t celebrating the soon-to-be-first female CIA director. Yep, shame on feminists for not cheering on a woman breaking the glass ceiling, while simultaneously breaking the spirits of detainees.

Can't wait to hear the feminists cheer this great development for women.

Some even argued that, hey, Trump’s nomination shows that he isn’t a misogynist who said he can sexually assault women whenever he wants because he’s famous. Look at you, feminists! Totally owned!

Known misogynist and woman hater Donald Trump appoints a woman to head up the CIA for the first time in history.

Hillary Clinton in India yesterday: Women were too dumb to vote for me.

Even President Trump himself congratulated himself yesterday for his historic hiring of a woman.

Alas, women actually had to answer to this call for faux celebration, writing several pieces explaining that yes, Haspel’s newfound leadership might be historic, but it certainly is not feminist.

“Her gender shouldn’t give her a pass on two major issues that will now be hers to explain and defend,” Julitette Kayyem, a former assistant secretary of the Department of Homeland Security under Obama, wrote for CNN. Those two major issues, Kayyem expanded, are her history of torture and standing up for CIA agents against the threat of Russia.

“My feminism does not demand that a woman have an equal opportunity to torture, alongside men. Torture is no less wrong because a woman, not a man, carries it out,” Mona Eltahawy explained in a piece for the New York Times. “My feminism, instead, works to dismantle patriarchy and its violence—whether it is sanctioned by the state, as torture is, or practiced at home, in the form of intimate partner or domestic violence.”

“In a sane society, Haspel would be in prison. In ours, she’s been elevated to the highest reaches of government,” writer Jill Filipovic wrote for Cosmopolitan. “Feminists will no doubt be labeled hypocrites for refusing to celebrate Haspel’s new role—aren’t we in favor of women in power? Yes, we are. But we are in favor of equality between women and men. And a man or a woman with Haspel’s history would be an equally egregious choice for this position, and equally worthy of disdain.”

Across Twitter, feminists were not about to let people using women as props for historic gains to get away with their false understanding of what it means to be a feminist.

What a proud moment for all the liberal feminists that the US' first woman CIA director, Gina Haspel, broke the glass ceiling by overseeing the torture of suspected terrorists, with such gender-inclusive brutal interrogation techniques as waterboarding & putting people in coffins

not only has gina haspel broken the cia's glass ceiling, she's using the shards to jam into the flesh of inmates detained indefinitely without trial!

Sorry, Trump. Having a woman on your team might be historic, but Haspel’s track record—be it belonging to her, or a male colleague—certainly isn’t worth celebrating.