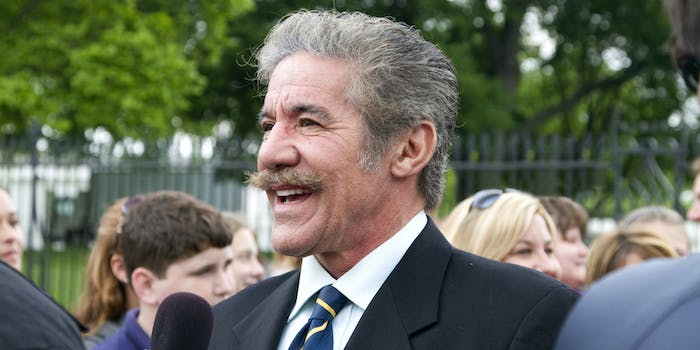 Geraldo's had it up to here with Facebook racists.

Fox News host and political commentator Geraldo Rivera went off on the racist elements of his audience in a post on his Facebook page.

Rivera, who hosts the Fox News Channel show Geraldo at Large, on Friday wrote something critical about anti-immigration activists, and in the comments section of that post, the vitriolic, racist, nativist, ignorant, and xenophobic elements of the Internet went to work.

Although Rivera has landed in hot water for insensitive comments of his own, he has long advocated for fair-minded, compassionate, and rational discourse on the subject of immigration and undocumented immigrants. He wrote a book about white Americans’ fears of Hispanics in 2009 and has generally been one of Fox’s more level-headed commentators whenever the network’s mostly-conservative panels debate immigration.

In his response to the comments on his original post, Rivera called these comments “hateful, ignorant and racist,” and he pointed out that some of them went after not just him but also his family.

“I’m turning your posts over to Fox News and Facebook authorities,” Geraldo said to the faceless racist hordes, “because you little pieces of shit hiding in the shadows of your mother’s basement deserve no less.”

It seems Rivera’s audience never learns, however. In the comments of this newest post, Roy Forgy wrote, “You are the only Racist here,” demonstrating the intellectual capacity of the average Internet racist by capitalizing a non-proper noun.