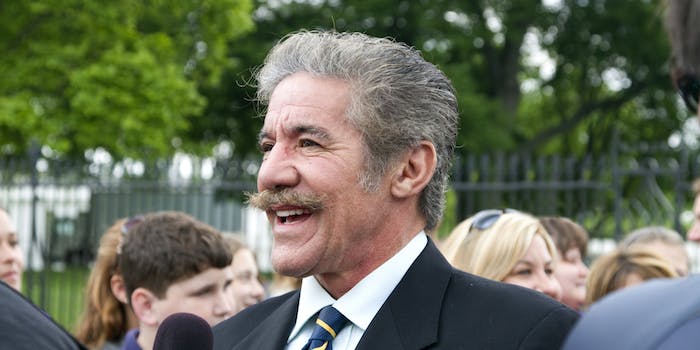 The protesters had enough of being called 'thugs' by Fox News.

Protesters in Baltimore want the media to tell their story—but that’s not the one it’s telling.

Tensions over the media’s portrayal of events in Baltimore came to a head Tuesday night when Fox News contributor Geraldo Rivera and a protester traded words on the Fox program Hannity.

Rivera was trying to interview Maryland State Senate Majority Leader Catherine Pugh, but he was blocked by protesters before he could get to her. After he yelled at one protester to move, another one started to give Rivera a piece of his mind.

“That’s the problem with the media,” the protester told Rivera. “‘Cause you want to report that we’re thugs and breaking shit down.”

When Rivera finally did interview Pugh, she too called out the media for being of the problem, and she shut him down when he fell back on the classic story of a crowd just wanting trouble.

“No, they don’t want trouble,” Pugh told him. “We want our people to go home, but we also need the media to move back, because this is just inciting people.”

Fascinating on Fox News to have Catherine Pugh correctly identify TV cameras as a source of tension in Baltimore.

Photo via Mark Taylor/Flickr (CC BY 2.0)