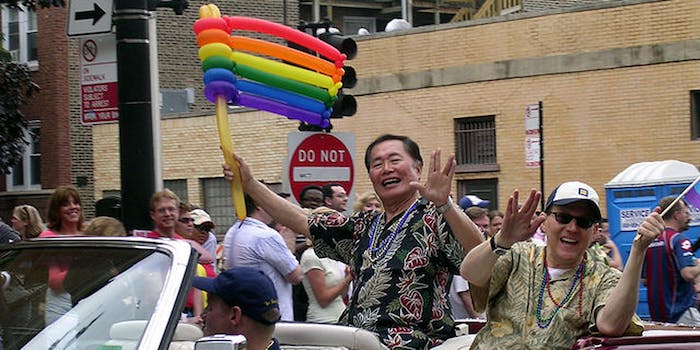 Takei might know a bit more about the loss of dignity than Thomas.

“Slaves did not lose their dignity (any more than they lost their humanity) because the government allowed them to be enslaved,” Justice Thomas wrote.

George Takei, the Japanese-American Star Trek actor and gay-rights icon who spent part of his childhood detained with his family in a World War II internment camp, was not about to let Thomas’ comments slide.

In an MSNBC op-ed published today, Takei took aim at the notion that Japanese-Americans forced out of their homes and into camps retained a sense of “dignity.”

“The guns pointed at us at every point reminded us that if we so much as tried to stand up for our dignity, there would be violent consequences,” wrote Takei. “The order and the ensuing confinement was an egregious violation of the Constitution and of due process as we were held, without trial and without charge, awaiting our fate.”

Takei went on to describe being shipped off to Arkansas, where he was surrounded by barbed wire and machine gun stations that pointed constantly at his family. Adding to the humiliation were the bug-infested sleeping barracks and the latrines with no walls between the toilets.

“For many, it was indeed a great loss of self-worth and respect, a terrible blow to the pride of the many parents who sought only to protect their children from coming to harm,” Takei wrote. “Justice Thomas need have spent just one day with us in the mosquito-infested swamplands in that Arkansas heat, eating the slop served from the kitchen, to understand that it was the government’s very intent to strip us of our dignity and our humanity.”