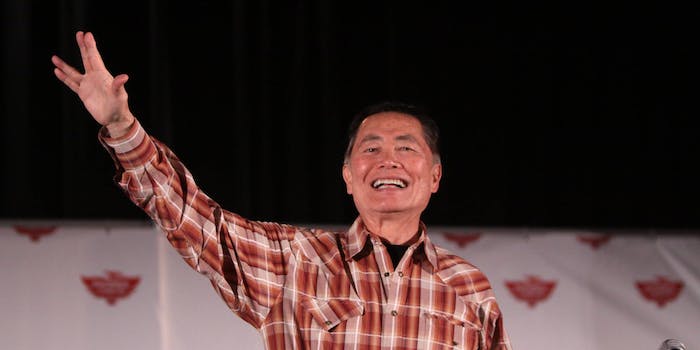 A former male model accused George Takei of sexually assaulting him in 1981 when he said the former Star Trek actor allegedly drugged him and groped his crotch.

Now, though, the accuser, a man named Scott Brunton, has changed his story. Instead of calling their encounter an attack, Brunton now says it could be characterized as “just an unwanted situation.”

In a lengthy interview with Observer, Brunton, “a sympathetic and well-intentioned man, would go on to walk back key details and let slip that, in his effort to be listened to, he’d fabricated some things. This and other evidence would indicate a hard-to-swallow conclusion: We—both public and press—got the George Takei assault story wrong.”

Brunton said he met Takei in 1981, and after a night out, Takei invited Brunton to his condo for drinks. After finishing his second drink, Brunton said he felt dizzy and Takei helped him sit in a beanbag chair. From Observer:

… Brunton lay down and “must have lost consciousness” for a moment, he said. He wasn’t sure whether he actually fainted or just experienced a brief memory brownout.

The next thing Brunton knew, his date was making a move on him. Brunton’s pants were around his ankles, and Takei was grasping at his underwear, Brunton said. Brunton protested, saying he didn’t want to have sex.

He said Takei was taken aback and replied, “I am trying to make you comfortable.”

Brunton did not believe him. He shoved Takei, telling him, “No.”

Takei was surprised. “Fine,” the actor said. He was not angry, according to Brunton.

Earlier, Brunton said he was sure Takei had drugged him by spiking his drink, but toxicologists interviewed by the website said that, with the date-rape drugs used in the early 1980s, Brunton couldn’t have been drugged based on his story (that he recovered so quickly and that he didn’t feel hung over the next day). Brunton also told Observer that he couldn’t be sure Takei actually touched his genitals.

Brunton said he’d told the story of his encounter with Takei for many years, but he said he used it as a “great party story” and that he wasn’t scarred by the incident.

Here’s how Takei responded to the new story.

As many of you know, this has been a very difficult period for myself and my husband Brad as we have dealt with the impact of these accusations, but we are happy to see that this nightmare is finally drawing to a close. https://t.co/nHCjnebCBO

As I stated before, I do not remember Mr. Brunton or any of the events he described from forty years ago, but I do understand that this was part of a very important national conversation that we as a society must have, painful as it might be.

Takei also wrote, “It is in that spirit that I want folks to know, despite what he has put us through, I do not bear Mr. Brunton any ill will, and I wish him peace.”