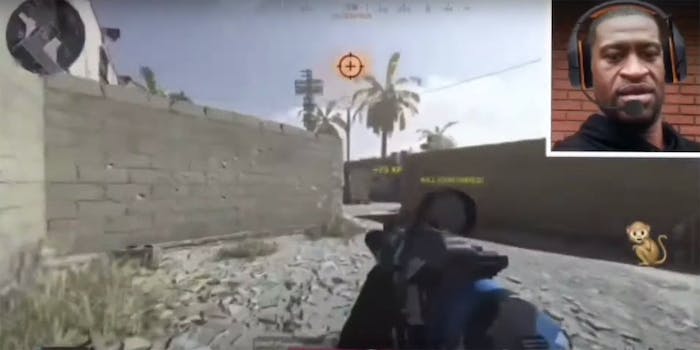 The YouTube channel depicted one of 2020's most tragic figures in a gaming headset.

A bizarre YouTube channel called “George Floyd Gaming,” which showed gaming videos with a gaming headset-wearing George Floyd in the corner of the screen, has reportedly been banned from YouTube on Monday. This came after several YouTubers took to the platform to call out the channel. Some commenters, however, voiced their dissent on those YouTube videos, alleging the creator is being unfairly targeted.

Though the original site now brings up an error page, there’s at least one video on the YouTube platform that features some of the content.

That video is a compilation of individual clips hosted on TikTok, under the @_georgefloydgaming_ handle, with videos soundtracked to a sample of Juice WRLD’s “Wishing Well.” (Update: That account appears to have been shut down shortly following publication of this story on Monday evening.)

George Floyd, of course, was a Black man in Minneapolis who died May 25 after being handcuffed and pinned to the ground by a white police officer. The death, captured on video, became the flash point for widescale protests across the United States and a broadening awareness of the Black Lives Matter movement.

Floyd’s image has been made iconic by some activists through murals and other representations, but his familiar image dropped into gaming videos has offended some to the point of calling for the channel to be deplatformed from YouTube.

Other YouTubers made their feelings known, understanding that while it appeared to be someone’s attempt at dark humor, it was ill-advised given the magnitude of Floyd’s death and the public reaction to it.

YouTuber Krzair, in a video titled “That George Floyd Gaming Channel That Shouldn’t Exist,” noted, “I just don’t understand why you would do that. You surely would expect that someone would eventually go, ‘Why the fuck would you do that?'”

Another observer, ADog 00, created a video titled, “Hey Youtube, stop this channel named “George Floyd Gaming” There, ADog 00 opined, “What’s wrong about this is it’s using a dead person for views, most likely, and maybe even money,” going on to allege YouTube wasn’t active enough in banning other potentially offensive sites, including ones showing animal abuse.

However, a number of commenters to both videos implied that the “George Floyd Gaming” creator was himself Black, writing, “Harassing a YouTuber because he’s BLACK is NOT OKAY.”

Another YouTuber, Brizan, joined the Discord server in the George Floyd Gaming channel banner, and discussed his self-proclaimed “detective work” in a video.

He claimed that other people on that Discord were making other offensively-named gaming channels (including “Pedophile Gaming,” which Kavos also called out when he tweeted about “George Floyd Gaming.”

“They’re all obviously friends who are trying to make dark humor,” he observed. He also describes going onto the server announcements section, where the channel discussed downvoting Krzair’s YouTube video calling out “George Floyd Gaming.”