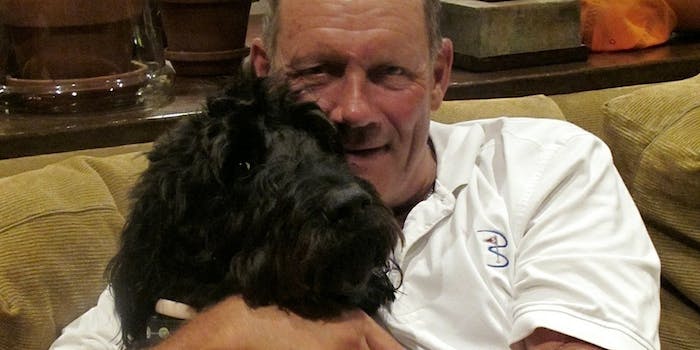 Pinning up posters around your neighborhood to find a missing dog is so old school. Even so, a baseball Hall of Famer opted to use Twitter to locate his missing pooch.

George Brett, currently the team president of the Kansas City Royals, was distraught when his labradoodle went missing late Tuesday. Even though he admitted he was “still new to this tweeter stuff,” he took to the community with all the confidence of a World Series champion to track down Charlie.

Brett offered a reward and posted a photo of himself with the canine. He added that Charlie was afraid of the rain and tried to get the hashtag #FindCharlie trending. However, the hashtag was tweeted just 27 times according to Topsy.

The 59-year-old also tweeted at Sports Illustrated and ESPN writers in an effort to get the word out.

Thankfully, the search ended on a happy note. Just after 9am Eastern Time Thursday morning, Brett tweeted a note of thanks to his more than 11,000 followers, telling the world that Charlie was home: “We got him! Thank you for all the support! It is so touching to see how many people care! You all were a big help! Thank you.”

With the aid of Twitter and some kind-hearted followers, Brett was able to track down Charlie within a few hours. It’s not yet clear whether anyone was given that “unspecified” reward for helping out, but it’d be surprising if they didn’t try to grab Brett’s World Series ring.