Tired of men interrupting you during meetings? Ladies, this 'gender timer' app is for you.

It’s a universally accepted fact that women are regularly interrupted by their male colleagues in boardrooms, events, and in the media. There’s even a term used to describe this phenomenon: “manterruption,” or what happens when a woman is sharing her opinion or idea and a man jumps in to cut her off, or offer up a similar suggestion.

While the portmanteau “manterruption” might sound silly, it’s a problem that women everywhere have experienced. But one application wants to amplify women’s voices and change the way we communicate by tracking how often men and women speak in the workplace.

Already available on iOS, Android, and the Web, creators Fredrik Eklöf and Andreas Bhagwani launched a Kickstarter campaign to raise money to make the application automatically detect when men or women are speaking, instead of relying on people to manually input the data. The voice-detecting algorithm will be accurate 85 to 95 percent of the time, the founders note on Kickstarter. Although the feature is imperfect, it will make it easier to use the app hands-free. 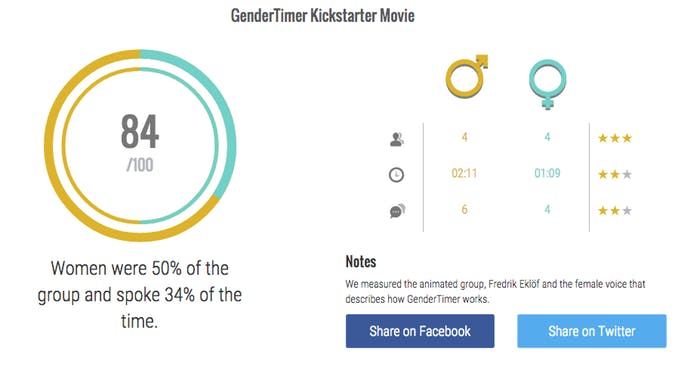 As Eklöf and Bhagwani explain on their Kickstarter page, men don’t usually realize they’re regularly speaking over women. People who have used the application have reported realizing their unconscious biases or behavior towards women in meetings.

“Manterruption” in the workplace is far more common than we’d like to think. According to a Yale University study, women in leadership speak up less frequently than their male counterparts and “powerful women are in fact correct in assuming that they will incur backlash as a result of talking more than others—an effect that is observed among both male and female perceivers.”

According to a Yale University study, women in leadership speak up less frequently than their male counterparts.

A Harvard Business Review study also found that more than half of Fortune 500 managers described meetings as a “significant issue or a ‘work in progress.’” Men said it was because women didn’t speak up enough, while women said they had trouble reading the room and were regularly interrupted.

By using GenderTimer, people can get a comprehensive picture of just how often colleagues speak. The creators hope this will create more balanced work environments that encourage listening to diverse ideas, rather than speaking over them.

GenderTimer isn’t the only application developed to highlight inequality in the workplace. Gender Avenger is another that works to ensure women are equally represented in the media by tracking the number of men and women present at a given event, or even on your favorite TV show. The application was wildly popular at the South by Southwest tech conference in March, as attendees used it to monitor how many men and women were on panels.