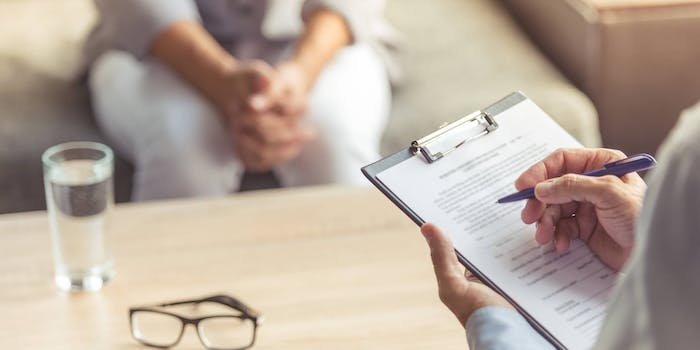 The dangerous connection between gender stereotypes and mental health

Our assumptions about 'stoic' men and 'vulnerable' women could be keeping people from treatment.

For 20 years, Aaron Harvey lived with violent thoughts. He was afraid of harming people and, at one point, was suicidal. But seeking help was something Harvey never thought to do.

“I was so scared my whole life of the symptoms I was experiencing and what that meant about my character and capability,” Harvey told the Daily Dot. “I was afraid of what it meant.”

But then a few years ago, he ran across an op-ed in the Guardian about dark thoughts associated with pure OCD—killing your partner, harming yourself, sexual thoughts about children and family members—and he realized that many others are also afraid to talk about not just mental illness, but also medication, therapy, and simply needing help. And much of this was aided by another rarely addressed issue: gender stereotypes.

“When headlines in the news constantly seek links between violence and mental illness, it’s easy for people to associate mentally ill men as being violent. In truth, mentally ill persons are less likely to be violent than the general population, and more likely to become victims of violence,” Harvey told the Daily Dot. “Similarly, when movies portray mentally ill women as crazy and promiscuous, it’s easy for people to judge women with mental health issues accordingly.”

This March, Harvey started Intrusive Thoughts to combat the fear people have about talking about mental illness while also breaking down those gender stereotypes. The site hopes to connect those with various forms of OCD with resources and stories from others. It is “a resource that seeks to celebrate your bravery, humanize the symptoms of OCD, and help place sufferers like me on the proper path to treatment,” writes Harvey on the site.

If you’re not sure about how gender relates to mental health, think of the personality traits you associate with masculinity and femininity. The best thing a man can be is strong, a leader who is unflappable in the face of adversity, someone who takes charge and makes decisions. Anxiety, sadness, and shyness are unbecoming in a man. Harvey says that while he was worried about being considered violent, he was also afraid of being seen as more vulnerable. “I have been very open about how my mental health issues led to extreme depression and harmful behavior,” he said. “Until then, I was absolutely concerned about masculinity stereotypes. In our society, being a downer is never a good thing.”

On the other side, women are supposed to be sensitive and emotional. These stereotypes are often used against men and women as one more reason they shouldn’t admit to needing help—and often to their detriment.

“A few phrases spring to mind here: ‘Be a man’, ‘boys don’t cry’, ‘that time of the month’—they reflect stereotypes of men being stoic, dependable, and strong, and women being emotional, weak, and unpredictable,” Rose Bretécher, who wrote that original Guardian article on pure OCD and who’s now a contributor to Intrusive Thoughts, told the Daily Dot over email.

For Bretécher, being a woman certainly affected how she expressed herself. “A couple of guys have asked me if I think it was easier for me to tell my story because I’m a woman, and I think in many ways it has been. Men are often unfairly stigmatized as sexually predatory, which could make admitting to thoughts about sexual violence, as I did, much harder,” she said.

Even men who grow up in progressive households don’t’ always have an easy time talking about their problems and asking for help. Panic and depression sufferer Ethan Hein says he was raised in a home where feminism and mental health were not taboo subjects—and yet it was still difficult to get over cultural ideas about masculinity and emotion. “My dad was outspokenly opposed to the idea of going to shrinks—he called it ‘cocktail party chatter,’” Hein told the Daily Dot. He said he was taught to value not “complaining” or “whining.”

Hein says that even though his mom encouraged open ideas about mental health, he didn’t feel like it applied to him—all of which came to a head in college, when he went through a period of severe depression. “I tried to white-knuckle through it out of manly stoicism, and it failed me incredibly hard,” said Hein.

A colleague eventually pushed Hein to make an appointment with a therapist, but Hein says it took him until that point to fully realize how much these ideas of stoic masculinity were a problem. “I was so worried about being perceived as weak or vulnerable, but then because of depression, I was as weak and vulnerable as it was possible to be.”

“I do see people who have delayed seeking treatment” because of gender issues, says Dr. David M. Reiss, a psychiatrist who has specialized in PTSD and LGBTQ issues. Dr. Reiss says it’s common for men to avoid treatment because of these ideas of weakness and for family members to avoid bringing up issues with men at all. “It remains all-to-frequent that in a family or in a relationship, a female member is more often the ‘identified patient’ in a dysfunctional system… Even if a male member of the family is known to be suffering from psychopathology (especially substance abuse), it is more accepted that a female seek treatment than a male.”

On the other hand, because women are assumed to be vulnerable and sensitive, it also means their concerns can be more easily dismissed.

When Lauren was in college (name changed for anonymity), her roommate pointed out to her that she had several symptoms of depression. “Her suggestion didn’t seem outrageous to me, so I at least recognized that something out of the ordinary was happening,” Lauren told the Daily Dot. But when she called her dad to ask him about it, he immediately said that wasn’t true, and told her to “eat a piece of chocolate and get over it.”

“I do remember feeling shocked that my dad wouldn’t even consider the possibility, wouldn’t react with concern. He was strict but certainly not cruel, and we had talked openly my whole life,” she said. She also said his reaction left her feeling very lonely. “This was my family, you know? How could they be so dismissive?” Her father’s reaction kept her from looking into therapy, even though she thought she may need it. She didn’t have the money to fund it herself and didn’t feel like she could ask her dad for help.