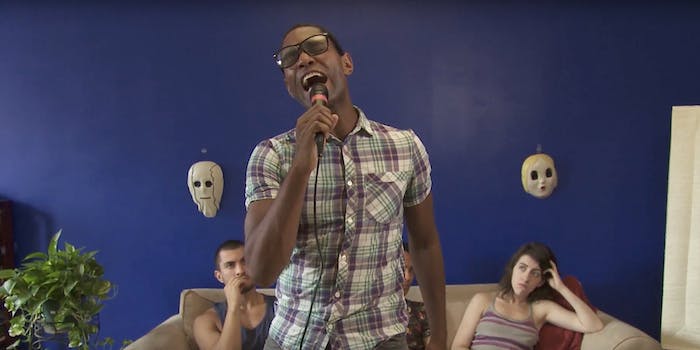 ‘Gaymers’ is, you guessed it, a webseries about gaymers

There's more than one kind of role-playing in this gay scene.

It’s been a great few years for LGBT geeks.

2015 saw the inaugural FlameCon, the queer comic con hosted by New York’s GeeksOUT. This year, FlameCon is even bigger, and the Miss Nerd New York Pageant promises to add to the geeky excitement.

But there’s nothing like seeing yourself and your interests represented on TV (or at least a decent-size computer screen)—and today, queer geeks can jump for joy, for the new webseries Gaymers is here.

“We just googled ‘how to launch a web series’ and did lots of reading,” Prakapas told the Daily Dot via email. “I came up with the ideas with my best friend—who is the writer—and we took to Craigslist, Reddit, and Facebook to find people to work on it.”

The series, which currently has four episodes online, was created on a slim-to-none budget. All cast and crew worked for free out of sheer devotion to the queer gaming world.

“A lot of this is inspired by my life and my dating life and how gay guys can sometimes think gaming is silly—like I’m just this man-child,” said Prakapas. “It’s hard, it’s tough. You find a guy who is attractive and you have to suppress that part of yourself.”

Available on Gaymerstv.com and on YouTube, the show follows a group of four roommates (two gay, one lesbian, one straight guy) who are devoted gaming nerds. It explores themes like nerd fights, weird roommate dynamics, and the ups and downs of dating people who simply don’t get the geek life.

In episode four, main protagonist Corey describes a dud date with a cute guy who thinks his gaming obsession is strange. But Corey thinks mainstream gay culture, with its “nightclubs, selfies, and going on about how it’s chest day at the gym,” is just as alienating.

Prakapas was inspired by his own love of geek culture, but he also wants to see more diversity in LGBT characters. In real life, the queer scene is peppered with nerds and geeks who know more about room escape games and Final Fantasy than about what Mariah Carey wore to the most recent Grammys.

“This is a show that is basically what I imagine would happen,” said Prakapas, “if 30 Rock and Scott Pilgrim vs. The World had an LGBTA-friendly webseries baby.”