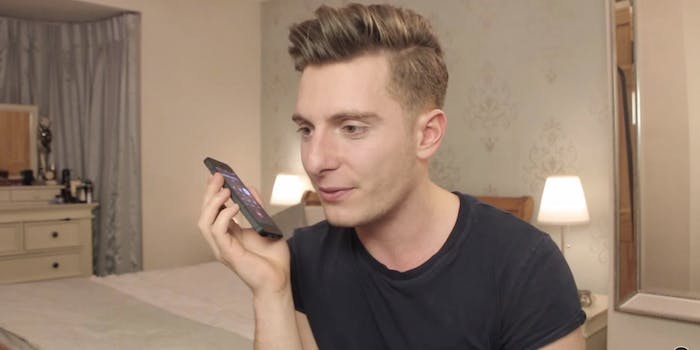 They were not amused.

In March, Irish YouTuber Riyadh K boldly went where no gay man had gone before by asking his mother to read his Grindr messages on camera. The hilarious and inappropriate stunt quickly went viral, garnering millions of views and thousands of comments, including several from famed Westboro Baptist Church crusader Shirley Phelps.

In the course of a week, Phelps left a barrage of hateful comments on the video, using the word “fag” 41 times in total. “This is what happens when the fag enablers turn the country to the fags,” Phelps wrote. “These people are going to hell.”

With the fate of his soul hanging in the balance, Riyadh decided to get proactive about his fate. So he called up Phelps to ask for advice on how to get into heaven. “If I burn all of my Lady Gaga CDs, will that get me into heaven?” he posited.

Sadly, the daughter of Fred Phelps didn’t have much good news for the YouTube personality. “God hates fags. You cannot change that standard. It doesn’t matter if you can get this entire goofy, disobedient nation… read the words and obey your God,” she told Riyadh before hanging up.

The Westboro Baptist Church might have taught Phelps how to obey her God. But it clearly didn’t teach her good manners.