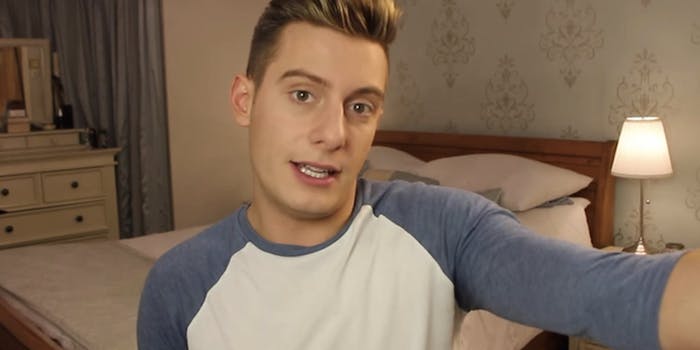 What happened when a gay YouTube vlogger called his former bully

Riyadh K decided it was time for an honest conversation.

YouTuber Riyadh K is notable for his funny videos, like his Justin Bieber hair tutorial or the time he taught his dad slang terms like “thirsty” and “cake.” On Sept. 28, the Irish vlogger published a video that’s a little more serious: He shared his experiences being bullied in school and then called one of his old school bullies to work it out.

Riyadh said he wanted to call so he could learn more about his former bully’s motives. In comments on his video, Riyadh says:

“This was the most nerve-wrecking thing I’ve ever done, but thank God I did it. That was the closure I needed. Holding onto old anxieties and pain is toxic. Thanks to him for being so open also.”

In his video, Riyadh shares that it took him an extra four years to come out about his sexuality because of the bullying he experienced.

His bully seems willing to have the conversation, which is promising. The bully explained that the group of teenagers didn’t target Riyadh personally, but that they picked on him just because he seemed different. When asked by Riyahd what people who are experiencing bullying should know, it’s interesting that the bully basically shares the “it get’s better” message.

Riyadh seems satisfied by the exchange, and relieved that he and his former bully were able to speak to each other. And it’s a relief to witness that there are some former bullies who can engage with their former victims with respect, in part because research indicates that those who are bullies as children usually grow up to continue the bullying behavior as adults.

It’s also important to note that bullies are themselves often caught in a vicious cycle, suffering from abuse in the home.

Riyadh lists a UK anti-bullying org, but for those in the U.S. who suffer from bullying or who would like to stop being a bully, check out these three resources: