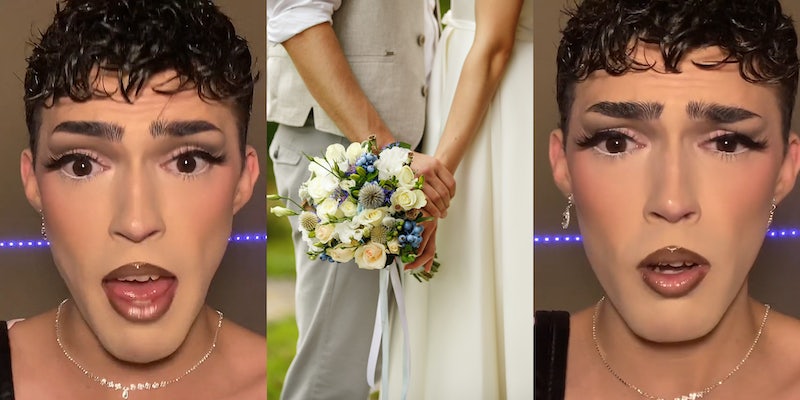 ‘This is one of the most personal hate crimes I’ve ever experienced’: TikToker says he was uninvited from his best friend’s wedding because he’s gay

'Not only did she disappoint me, she is disappointing the entire gay community.'

A TikToker says that he was uninvited from his longtime best friend’s wedding because he is gay.

In a video posted by Devin Valeno (@devinvaleno) on Oct. 31, the creator says that “one of [his] best friends of seven years just uninvited [him] from her wedding.” He goes on to say that after he RSVP’d to the wedding, the bride called him asking him to “not wear makeup or anything girly” to the wedding to ensure that her family members weren’t “uncomfortable.”

On another phone call, Valeno says that his friend told him she had talked to her father and that they had decided that “maybe [he] shouldn’t show up to the wedding at all.”

“‘Just having you, you and your boyfriend here, and you guys being gay and all. It would really make my family uncomfortable,'” Valeno claims his friend said to him.

In response, he says he told his friend he didn’t think he could continue on with the friendship if she couldn’t accept that he is gay. The TikToker says that his friend agreed that they should no longer be friends.

“Not only did she disappoint me, she is disappointing the entire gay community,” Valeno says in his TikTok, which had over 5 million views on Thursday. “It’s 2022, people will still just throw you out like you’re not shit just because of the fact that you’re gay.”

In the video’s caption, Valeno wrote that “this is one of the most personal hate crimes [he’s] ever experienced.”

@devinvaleno This is one of the most personal hate crimes I’ve ever experienced. Wake up It’s 2022 and gay people aren’t going away! #fyp #viral #fypシ ♬ original sound – Devin V

Many commenters on Valeno’s video offered him their support and condolences.

“This breaks my heart. I am so sorry to hear this kind of human being entered your world,” @amymareematthews commented. “True supporters are here for you!”

“I’m so sorry this happened,” @trishoj1730 wrote. “She would have been so lucky to have a friend like you at her wedding.”

“It’s sad that you and others in your community have to endure pain like this because others aren’t willing to accept you,” @kawaiiposh wrote.

The Daily Dot has reached out to Valeno via email.