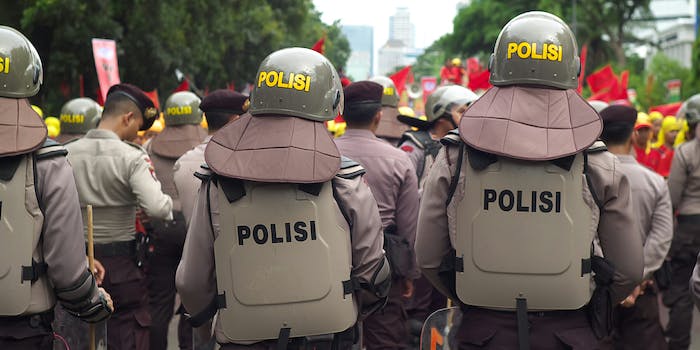 Police allegedly took naked photos of the detainees and encouraged sharing them on social media.

In what is being called a raid targeting the gay community, 141 men were arrested Sunday evening at a gay gym and sauna in Jakarta, Indonesia.

The Washington Post reports that the sauna was hosting a sex party called “The Wild One,” which police allege violated the country’s pornography laws, leading to the arrests. Ten attendees have been charged, including the sauna’s owner, strippers, and two visitors who the police said engaged in oral sex. The suspects could face up to 10 years in prison if convicted.

After the arrests, police covered the men’s faces in black ski masks and placed them on display for the country’s media. According to local activist organizations, the police also took pictures of some of the arrested attendees’ naked bodies and encouraged them to be spread on social media. The situation reveals a problem within Indonesia, where, even though being gay isn’t illegal except for in the province of Aceh, police treat gayness with mockery and shame and ultimately detain individuals for their sexuality.

Indonesia’s anti-pornography laws are also quite strict. According to the Australian Broadcasting Corporation, pornographic possession can land people in jail for four years, and any form of sexually suggestive performance can lead to 12 years behind bars. The law particularly punishes others for sexually explicit “bodily movements,” a term which is notoriously vague.

The raid also begs a larger question about LGBTQ rights throughout the populous Muslim country. Previously, anti-LGBTQ comments have been made by Indonesian bureaucrats, fueling homophobic sentiments within the nation. And earlier in May, a Shariah court inside Aceh sentenced two gay men to 85 lashes for having sex.