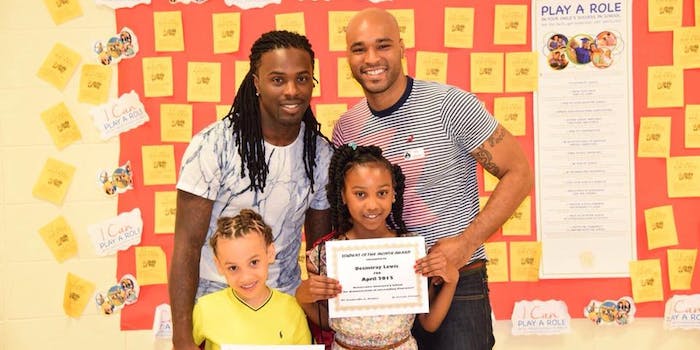 Their relationship may be over, but they served as inspiration to many over the past year

Instagram‘s favorite gay dads just announced their breakup on the same platform that made them Internet-famous.

Kordale Lewis and Kaleb Anthony went viral in January 2014 with this photo of them brushing their children’s hair in the morning .

Being fathers is getting our daughters up at 5:30 am making breakfast getting them dressed for school and putting them on the bus by 6:30 .This is a typical day in our household . It’s not easy but we enjoy every moment and eveny minute of #fatherhood . #proudfathers #blackfathers #prouddads #gaydads

The photo was liked over 50,000 times and the dads quickly found themselves being interviewed by Melissa Harris-Perry on MSNBC, getting feature spreads in Cosmo and other magazines, and even starring in a Nikon ad. The couple’s Instagram page now has 187,000 followers. They also have 39,000 Facebook followers. And last year, Kordale published a book about the couple’s adventures in Internet fame.

But early Wednesday morning, Kaleb Anthony (who has reverted to spelling his name with a “C” rather than a “K” but has not changed any of his accounts on social media) posted a series of six heartbreaking posts detailing his decision to leave his partner, Kordale.

Fans were shocked by the posts, in which Kaleb described being “disrespected” by Kordale.

“Love is a beautiful thing when it is with the right person,” wrote Kaleb in the posts, “When that person isn’t leading you on and he or she is TRUE TO YOU (sic)… Love truly wins and I wish the best for Kordale as I will always love him but it’s time for Caleb to move on.”

The couple’s three adorable children, Kordale Jr., Maliyah, and Desmiray, call them “dad” and “pops.” There are also three dogs in the mix—and the family photos frequently posted to Instagram, Facebook, and Twitter are always packed.

This by faaarrrrr is one of the BEST Father’s Day gifts!!! The thought of this brought tears to our eyes!!! Happy Father’s Day to all of the men taking care of their children! #BestGiftEver

The couple also posted family videos to their YouTube channel, where some of videos received tens of thousands of views. Many fans called for the family to produce a reality show, with one writer at The Root saying she’d “watch it every week for the rest of my life.”

Perhaps the saddest part of the Kordale and Kaleb breakup is that the Atlanta-based couple had planned to marry this year, after marriage equality became legal across the nation.

Kordale and Kaleb may be over, but they served as inspiration to many over the past year, both as an example of a happy and successful gay family and as role models for fathers of all kinds who are the primary caretakers of young kids.