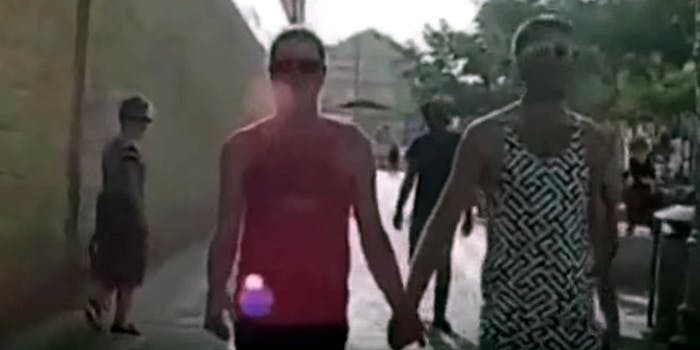 Here’s what happens when two men in Jerusalem hold hands

They didn't receive a warm welcome.

Late last month, an orthodox Jewish man attacked innocent bystanders at a gay pride parade in Jerusalem, killing a 16-year-old girl—a violent warning to the city’s LGBT community. But instead of cowering in fear, two gay men recently took to the ancient city’s streets to see what happened when they strolled hand-in-hand.

Israeli news outlet Ynet captured the journey via hidden camera, as the two men, Shai and Ophir, walked through various parts of Jerusalem. Some people ignored them, some gave them confused second looks, while others, according to Ynet’s translation, shouted angry slurs like, “You gay sons of bitches” and “Fuck you, you dirty gays.”

The attacks at the parade on July 30 were carried out by a man who is part of the Haredi sect, which is highly conservative. He was recently released from prison after serving 10 years for stabbing three people at the 2005 gay pride parade.

The Jewish Chronicle shared a photo of the suspect being apprehended on the street in Jerusalem.

After seeing the reaction of locals to the two men walking down the street, it’s clear that LGBT rights have a ways to go in Israel’s capital.