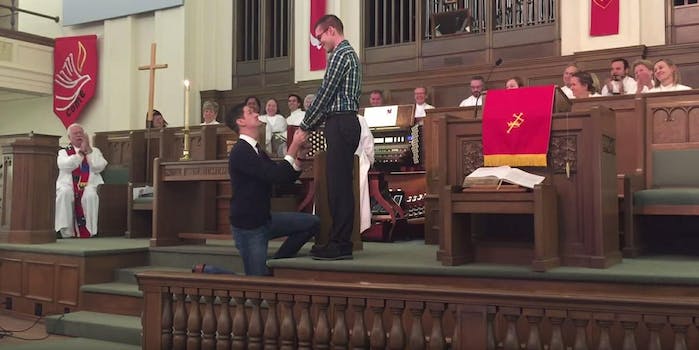 This might be the most heartwarming thing you see all day.

If you’re in need of something to brighten up your day, look no further than a heartwarming proposal that took place at a Texas church earlier this week.

Trevor Harper and Davis Covin, a gay couple living in Austin, Texas, have been together since 2006. They’ve attended First United Methodist Church of Austin for about two years and are active in their church community. Harper told BuzzFeed that the congregation has been very supportive of their relationship and does not discriminate based on sexual orientation.

Harper’s pastor, Reverend John Wright, has been helping him plan his proposal to Covin for a few months. In this video, under the guise of “sharing their faith story” with the congregation, Harper adorably ambushes his now-fiancé with a touching proposal that gets a standing ovation from the smiling, cheering onlookers.

The church, Harper said, was the first place in Texas where they could “live out loud” as a gay couple. Naturally, they would love to walk down the aisle there.

Unfortunately, the United Methodist Church doesn’t permit same-sex marriage ceremonies to be held in its churches or to be conducted by Methodist ministers, so Harper decided that proposing during church would be the next best way to include their church family in their happiness. He is also hoping that, by the time the wedding rolls around in 2016, the rules will have changed.

Harper said he was sharing his proposal story to show others that not all churches and religions disdained same-sex relationships. Being gay and being a Christian are not mutually exclusive, he said, and many people of faith are more than willing to embrace same-sex members of their community with open arms.