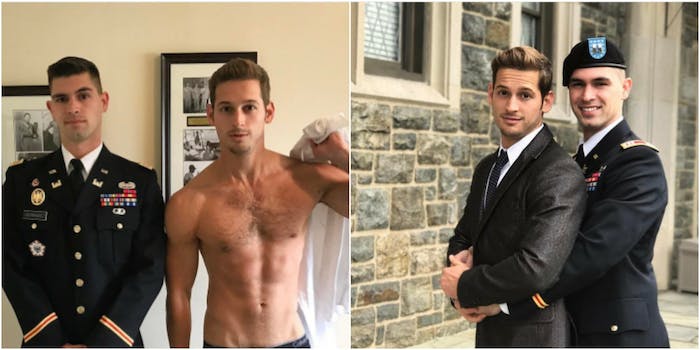 If only all our prom photos looked this good.

Both posted photos on their respective Instagram accounts with the hashtag #GayArmyProm. In some, the couple was fully clothed, in others, they revealed…a little more.

A number of people reached out today because of negative comments about my relationship in ugly corners of the internet. I ask that we fight those comments with some #positivity and #love. We live in times that will test the progress we have made. Rest assured, from my vantage point, I have seen nothing but professionalism and support from within the military ranks. Thanks for the support, you guys/gals are the best 100,000 people on Instagram!

The photos quickly went viral, with the one in a classic prom pose receiving over 36,000 likes.

Many praised the photos as a sign of inclusivity in the military. According to Emerson, whose also an actor and model, the support has been particularly meaningful for Camilo, who came out for the first time publicly last year in a YouTube video shot by Emerson.

“Andrés was pretty concerned about coming out last year, and to see how many people are being inspired by his story is really encouraging,” Emerson told the Huffington Post.

Visibility is a big step away from the “Don’t ask, don’t tell” policy, which was repealed only six years ago, the couple said. For those struggling with their sexuality, Emerson said, “Be kind to yourself. Be kind to others. Be patient, because it gets better.”