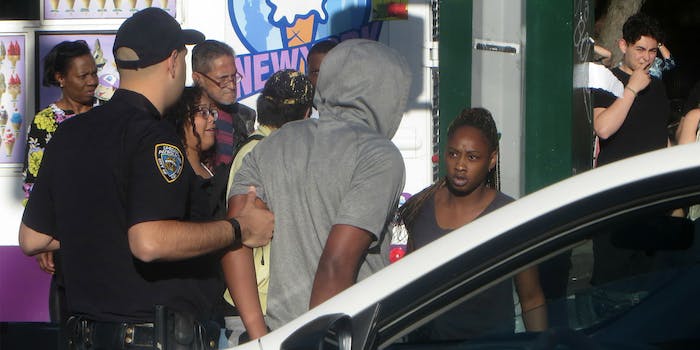 Though you might not hear much about gang activity these days, gang databases continue to thrive and do damage in cities across the country. In fact, even under the most so-called liberal leaders, these databases are being used by police departments for racial profiling and to provide information to ICE.

The Intercept reported this week that New York City’s gang database has grown by 70 percent under Democratic Mayor Bill de Blasio, a man who has criticized ICE’s “provocative actions” against immigrant communities in the past. An average of 342 people a month have been added to New York City’s gang database under de Blasio, even though gang violence comprises only 1 percent of crimes in a city where crime is at a record low.

Obviously, not all of the over 40,000 people in this database could possibly be considered gang members. Some on the list are even classified as “inactive,” which seems to contradict the idea of being in a gang.

A closer look at the New York database makes things look even worse. First of all, the definition of a gang is incredibly loose: “a group of person with a formal or informal structure that includes designated leaders and members, that engage in or are suspected to engage in unlawful conduct.” Some criteria for gang database inclusion has been as innocuous as “staying out late,” “changes in behavior,” and active use of social media.

Imagine being a young black or brown kid living in de Blasio's NYC, where wearing any of these colors can get you labelled a "gang member" and put in the "gang" database.

Imagine if we did the same thing to white kids on the Upper East Side. https://t.co/qXeLUuNZht pic.twitter.com/NrBnPX0Ojd

While the criteria is quite elastic, there are clear patterns. In analyzing the data, CUNY School of Law professor Babe Howell found that 99 percent of those added to the New York’s database between 2014 and 2018 were non-white. Yes, 99 percent were people of color.

The net effect of this database is young men of color are criminalized under the flimsiest of pretenses. New York is by no means unique in this regard: Gang databases are being used for racial profiling across the country. ICE then uses these databases as a tool for their mass deportation campaign. According to the National Immigration Law Center (NILC), “Gang databases are illustrative of how inaccurate and misleading information can migrate from one federal or state database to another and can be used for immigration enforcement, with devastating effects.”

ICE has a playbook it uses to criminalize and then deport young men, and it was in play long before the Trump administration took power. According to the NICL, “ICE has its own Gang File that accesses GangNET and other investigative systems developed by private contractors. A Gang File in the FBI’s NCIC database provides information…to ICE.” The result is that in many American neighborhoods, men are routinely being pulled from their homes thanks to gang designations.

In 2011, 19 year-old Luis Vicente Pedrote-Salinas was pulled over by the Chicago police. Officers found an unopened beer can in his car, but booked him for underage drinking anyway. While the charge was eventually dropped, Pedrote-Salinas’ name was added to the city’s gang database; as far as the Chicago PD were concerned, Luis was a Latin King. From that day forward, ICE used this gang status to deny Pedrote-Salinas the protections he was entitled to under DACA, and has continually tried to deport him.

Last year, Wilmer Catalan-Ramirez was violently arrested and seriously injured during a warrantless raid ICE conducted at his home. The raid was made possible because he was on Chicago’s gang database, according to reporting by the Marshall Project and the Pacific Standard. He was placed on the database in 2015 because he was seen standing next to someone else in the database. Pacific Standard followed up on Catalan-Ramirez’s case earlier this year and found that when he was entered into the gang database, he had been entered as a member of two rival gangs.

Catalan-Ramirez is suing CPD for excessive force in the wrongful arrest. Meanwhile, he is still fighting his deportation in court.

Under the Trump administration, ICE has apprehended thousands of immigrants that they claim are confirmed gang members. Time and again, the agency has had trouble connecting most of those arrested with any proof of gang activity. Following a July 2017 raid in which ICE claimed to arrest over 600 “confirmed” gang members in the Chicago area, the agency could only furnish proof of criminal conviction for 130 of those taken into custody.

A report by the Marshall Project found that wearing an El Salvador soccer jersey, writing an El Salvador area code in a school notebook, or being seen in the presence of people in the database could get you placed on Chicago’s database as a member of Trump’s preferred bogeyman gang, MS-13.

Again, Chicago and New York are not unique. Hundreds of municipalities nationwide, including liberal bastions like Seattle, Los Angeles, and Washington, D.C., have not only been maintaining expansive gang databases, but also allowing ICE to comb through them in search of potential targets for deportation.

Human rights organizations and advocates for various minority groups are taking actions against these databases, arguing they amount to little more than high-tech tools for racial and class-based profiling. The ACLU is suing Los Angeles in hopes of ending the state of California’s gang database, known as “CalGang,” completely.

Thanks to their placement on the CalGang database, over 10,000 Los Angeles residents are subject to an injunction that prohibits them from taking certain actions in designated neighborhoods. According to the ACLU, a man subject to gang injunctions may not be allowed to “visit neighbors in their homes, drive to church with his family, ride his bike through the local park, or even stand in his own front yard with his father or brother.” As in other areas of the country, young Latino and Black men in California are placed on the list under the flimsiest of pretenses (61 percent of those on CalGang are Latinx, 21 percent are Black). Many find their names on the list after simply admitting they live in a neighborhood that is or was once known for gang activity. Many were never found guilty or even tried for a gang-related crime. The ACLU sees this as a violation of civil liberties.

An effort is also being made by criminal justice reform advocates in New York City to draw attention to and fight back against gang databases. “FOIL Yourself” is a movement encouraging New Yorkers to file Freedom of Information Act requests to see if they too are in the gang database.

Similar campaigns and protests are taking shape across the country, and the fight against these databases is starting to yield gains. California’s CalGang is seeing stricter oversight in 2018 after an audit found that 42 people on the list were younger than one year old—yes, they were babies. Portland, Oregon, totally abolished its list. The change in Portland came in 2017, after an audit found that 81 percent of those on the list were people of color, yet known white supremacist Jeremy Christian, who would go onto murder two Muslim women on public transit, was not on the list.

Until efforts like these gain traction nationwide, gang databases will remain one of the Trump administration’s strongest tools for demonizing minority groups and enabling ICE. Though city mayors like Los Angeles’ Eric Garcetti, Chicago’s Rahm Emanuel, and NYC’s Bill de Blasio see themselves as heroes of the anti-Trump resistance, they are aiding and abetting the Trump administration’s most evil activities as long as these gang databases are still being used.