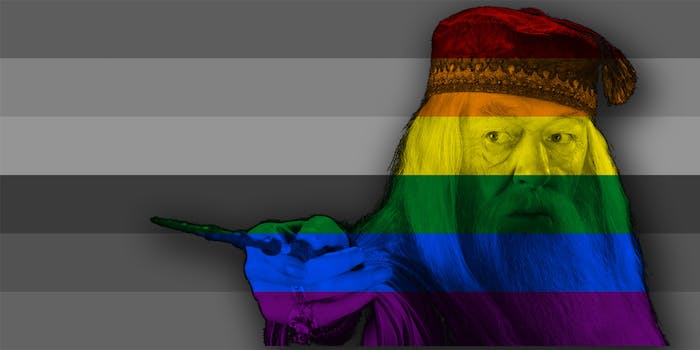 Equality House, the rainbow-painted LGBT rights stronghold in Topeka, Kansas, across the street from Fred Phelps’s famous ‘God Hates Fags’ church, will host a wedding between Dumbledore and Gandalf on Sunday afternoon. The organization that owns the house—which is purposefully decorated to look like a rainbow flag in order to troll the anti-LGBT Westboro clan—announced the wedding after Harry Potter creator J.K. Rowling got into a public Twitter spat with the homophobic church.

“Our greatest hope is that this magical wedding will inspire others to stand against hate, even in the shadow of bigotry, and send a message to let all LGBTQ kids know they are loved and valued,” reads a statement from Planting Peace, the organization that bought and rainbowed the house and is using the wedding to crowdfund donations.

“In lieu of wedding gifts, the happy couple invites you to celebrate their love by making a donation to help counter the harmful messages of anti-LGBTQ groups,” Planting Peace said.

As far as we know, the ceremony will not include the presence of notably gay actor Sir Ian McKellen, who plays Gandalf in the Lord of the Rings films. McKellen has been publicly out about his sexual orientation since 1988, when he discussed it in a BBC Radio interview.

The two actors who have played Dumbledore in the Harry Potter films, Richard Harris and Michael Gambon, are Irish. A meme about Dumbledore marrying Gandalf first appeared in May after Ireland became the first country in the world to legalize same-sex marriage by popular vote.

Rowling first announced that Dumbledore was gay in 2007 at a talk in New York.

“Dumbledore fell in love with Grindelwald, and that added to his horror when Grindelwald showed himself to be what he was,” Rowling said in a question-and-answer session with fans at Carnegie Hall, “To an extent, do we say it excused Dumbledore a little more because falling in love can blind us to an extent, but he met someone as brilliant as he was and, rather like Bellatrix, he was very drawn to this brilliant person and horribly, terribly let down by him.”

The shade of it all, to quote RuPaul’s Drag Race. It seems Dumbledore experienced his share of gay drama years before his upcoming destination wedding.