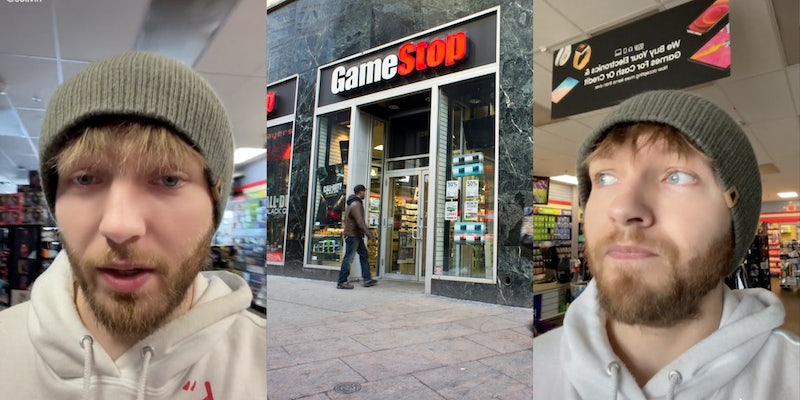 'They only care about the almighty dollar.'

Securing employment in an area of interest that you have seems like the golden ticket to happiness. Sure, there are difficult aspects to any job, but if you’re working in a field that pertains to something you love, then overall you’ll be happy, right?

Well, the internet is full of stories from devoted video-game enthusiasts who thought this way before applying to GameStop, only to ultimately discover that this isn’t always the case. Experiences of employees at the popular gaming franchise have described their time there as “upsetting” or “a living hell.”

One worker, TikToker Cody Colvin (@collvin) developed such a strong dislike for the company during his time there that he decided to out some of the business’ better-guarded secrets in a video that went viral on the popular social media platform.

He says in the clip, “Hey, what’s going on guys, so I’ve decided I hate this company. It’s terrible, it doesn’t care about its employees, anything like that, so, what I’m going to do is I’m gonna let you in on a little bit of how it works here, the secrets that GameStop’s not telling you that I think are a bit shady that don’t get enough light put on them, and it should be public information.”

Colvin then begins to spill the beans on GameStop’s insistence on selling pre-owned games, as they make higher profit margins on these titles. If you’ve ever attempted to sell a title to a GameStop store, then you’ve probably been disappointed with the amount of money the shop offered, and you wouldn’t be alone.

“Something that GameStop does is they promote pre-owned games a lot. They push pre-owned games, they want us to sell the pre-owned copies to the consumer,” Colvin continues. He claims the reason for this is that there is a higher profit margin for GameStop that way.

“Now you can say, ‘oh, companies Cody, they have to make money so what’s wrong with them selling pre-owned games, they’re cheaper than the new games? Yes, most of the time they are,” Colvin says. He then explains the tactic the gaming company uses to get customers to spend extra money.

“Let’s say a new game, a $60 game is on-sale at some weekly sale online. They may promote that on the online website, but to the average consumer that comes into the store, we do not promote that that particular game is on sale,” he explains. “We do change the price tag on it, but here’s what we’re gonna do, OK? We are going to put the pre-owned title, in front of the new title. Even the one that’s on sale, we’re gonna put it in front. So, if the new title that’s on sale that week is on sale for $35, we’re gonna put that pre-owned copy of it in front of the new one for $55. And we’re gonna sell them the pre-owned copy.”

There probably aren’t too many people out there who would be happy to know that they ended up spending $20 more on a game that’s been used over a new copy.

In the comments section of Colvin’s video, several other folks chimed in with their own GameStop work horror stories. Others remarked that this practice was “common knowledge,” while others said that the business needs a “competitor in the market.”

“I went to buy a new game, I watched the guy put a used disc in the case, used as in the envelope it was held in was marked “used” and he wouldn’t let me check the disc either, and soft blocked my transaction to push the old rewards thing on me, so I left with nothing,” one user wrote.

“Sounds like the customer needs to research and ensure their getting the right deal. Can’t fault the store for marketing tactics. Every store does,” another user argued.

“I was done with gamestop the first time I tried selling my games to them,” a customer wrote.

“My husband went to sell his Xbox and 4 games a few years ago they offered maybe 60$ for the whole bundle,” a fourth stated. “We just walked out.”

There are some ways to “hack” GameStop locations to use as video game rental services if you use the store’s $14.99 a year Power Up rewards card with pre-owned games. With the card, pre-owned titles have an extended return rate and you can bring the game back into a GameStop and return it for the price you paid, usually with no questions asked, after purchasing it.

Theoretically, if you wanted to try new games but didn’t necessarily want to own them you could buy the said games and return them before the 30-day period is up. Then you could re-purchase it should you choose to do so, hold on to the receipt and do it all over again, or just decide to try out another game entirely.

The Daily Dot has reached out to Colvin via TikTok comment and GameStop PR via email for more information.