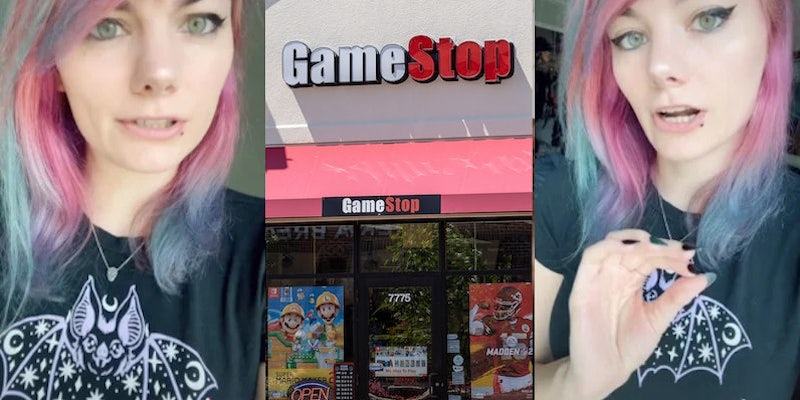 ‘The smell is just so nauseating’: GameStop employee says adult customer pooped in store on her first day

'It was not her child's diaper.'

A former GameStop employee went viral on TikTok last week after sharing the gross details of her first day on the job.

In the video, Skyla Raynes Gray (@skylaraynesgrayy) said a woman and her child came into GameStop to return an item on her first day of work.

“She comes in with this really, really gross Xbox,” Gray said. “She puts it on my counter and she says, ‘Hey, I bought this here and it doesn’t work.’”

The woman purchased the Xbox over a year prior to this exchange, and she didn’t have the receipt. She did, however, purchase the insurance.

Gray said that she didn’t know how to do an insurance exchange since it was her first day, so it was taking her a while to figure out.

The woman’s kid started to run around, spin the gift card rack, and throw game boxes on the floor, Gray said.

As Gray started the process of exchanging the item, Gray said the whole store smelled like poop. She assumed that the kid had a full diaper.

“The kid is trashing the store,” Gray said. “And the smell is just so nauseating.”

Gray clarified in the comments that she was working alone on her first day because her manager went to get coffee. Once her coworker arrived and took over the transaction, she ran to the back of the GameStop and threw up.

When she went back inside, the woman turned around to leave.

Gray said the woman and her kid left without cleaning up the mess they made, and it took 30 minutes for the store to stop smelling like poop.

Gray said the experience was “alarming.”

Other retail employees took to the comments to share their similar, poop-related work stories.

“I worked at a grocery store and a man shit himself in the store and just kept walking around,” one person shared.

“I worked at a restaurant where some lady went and shit her pants in a booth,” another person commented. “She went to the bathroom, took off her pants, threw them in the sink and proceeded to walk out of the building pantless, tracking shit from the bathroom to the front door. We had to close for like 5 hours to get the booth, bathrooms, and carpets professionally cleaned.”

“I worked at a camera shop and a dude ran into the shop and shit everywhere,”  another person wrote. “He still wanted to buy a camera flash when his pants had a shit stain.”

Other commenters expressed a different perspective on Gray’s story.

“Just wanna point out that there are some medical conditions where you can’t control it,” one person wrote. “She might’ve not known.”

“Not to take her side but some people don’t have feeling, so they have no idea they soiled themselves,” another person commented. “She might have thought it was the baby too.”

Still, other commenters were worried about the child in Gray’s story.

“Please tell me you called Child Services!” another person expressed in the comments.

The Daily Dot reached out to Gray and GameStop.