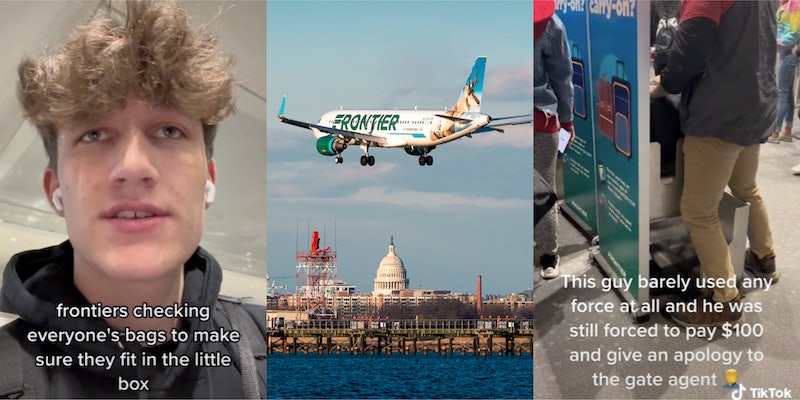 ‘This guy barely used any force at all, and he was still forced to pay $100’: Passenger allegedly had to pay bag fee after using force to fit bag into dimension-checker box

The @cubsracingsociety TikTok account went viral after posting a clip of a Frontier Airlines worker telling a passenger to apologize to a gate agent, claiming that he attempted to “embarrass” them during the pre-boarding process as he tried to check the dimensions of his carry-on.

“Frontier’s checking everyone’s bags to make sure they fit in the little box, and if it doesn’t fit, then you have to pay $100,” the TikToker explains in the clip posted on Nov. 5. “Which is dumb because you’re gonna carry the bag on the plane anyways you just have to pay an extra hundred dollars if it’s a few inches bigger.”

The video cuts to a man who was asked to put his backpack into a small metal box that is used by the airline to determine whether the luggage is small enough to get out of paying the $100 fee.

Text overlay on the clip reads: “This guy barely used any force at all, and he was still forced to pay $100 and give an apology to the gate agent.”

“There was no shoving,” the man says. In the clip, it seems that the bag fits in the bin.

The clip then shows the passenger speaking to a man, who says he is a Frontier Airlines worker. The worker says to the man, “So the fact that you have to embarrass my agent in front of everybody, you know how this is embarrassing?”

Before allowing the passenger to board, the worker continues to lecture the man, adding, “No, so before you go on, you owe her an apology.” The passenger simply nods his head and walks off camera.

The TikToker claims the passenger, who “didn’t say anything disrespectful or embarrassing,” was not only forced to apologize to a gate attendant but was also slapped with a $100 fee because his bag didn’t fit the airline’s carry-on baggage guidelines.

At the end of the video, he includes a picture of the passenger wearing multiple shirts in a bid to make his bag lighter. Text overlay reads: “This guy was so chill I guess frontier just sucks”

Many commenters shared their own experiences with Frontier Airlines, saying that this type of alleged nickel-and-diming is typical of budget airlines like Frontier. Others said they would rather avoid the airline entirely, even if it means paying more money for a ticket.

“Letting a grown man talk to a grown man like that was the real crime here,” one user wrote.

“Flew frontier once and that plane made sounds I never heard on American delta jet blue or southwest,” another shared.

“They’ve just been fined $2 MILLION by the Dept of Transport for their trickery (literally, the word used was ‘trickery’),” a third added.

The Daily Dot has reached out to @cubsracingsociety and Frontier Airlines for further comment via email.