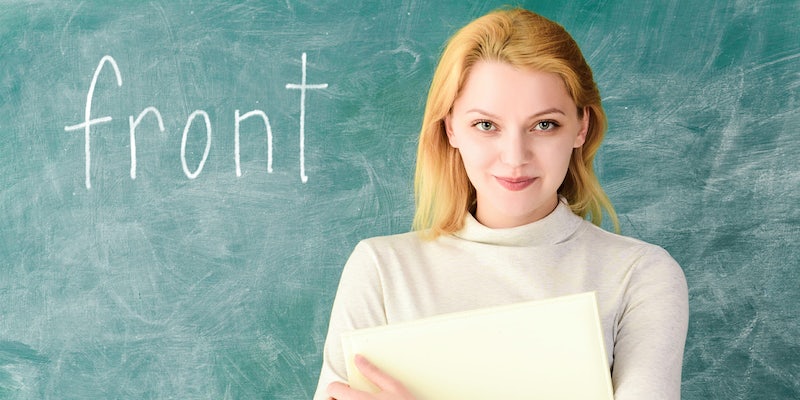 An expert weighs in on the ‘front hole’ debate

Some call the term ‘overly-PC’ but sexologists use it for good reasons.

Over the past week, there’s been intense backlash over the usage of the term “front hole” to refer to the vagina in certain contexts. People online are saying it’s childish, sexist, or another instance of political correctness run amok. However, sexologists have good reasons to use this term, and it’s not as simple as the quippy dismissive comments would have you think.

The first thing to know is that, although some right-leaning publications and people have claimed otherwise, no one is advocating for the complete replacement of vagina with front hole. The debate started this week when Rita Panahi tweeted out the LGBTQIA Safe Sex Guide from Healthline with a screen capture of the part where they say they’ll be using the term ‘front hole’ “instead of soley using the medical term ‘vagina.'”

The tweet quickly spread, as did outrage about the term. The most common complaint is that it’s “political correctness” and people trying to “force” this term on people.

Pray for our country. Liberals are destroying our culture!

However, this guide does not replace the word but uses both of them. In the section where they introduce this terminology, it says “whenever we use the medical term ‘vagina,’ we’ll also include ‘front hole.’” The guide is also clear that it is not advocating for a culture-wide replacement of the word vagina, saying, “This usage is meant for one-on-one communication with trusted persons, such as your doctor or partner, not for broad discussion.”

Simply put, people are offended by demands that are not actually being made of them. Those claiming to be offended in the name of free speech are actually arguing against more diverse language. Healthline even responded directly to these false claims, with an article titled “We’re Not Renaming the Vagina.” In their response, they note that the National Institutes of Health, the Human Rights Campaign, the BMC Pregnancy and Childbirth journal, and Fenway Health all also use this terminology.

Healthline and other sexual health advocates have good reasons to use terms like ‘front hole’ or ‘girl dick’ when educating and working with people. The Daily Dot spoke with Dr. Lindsey Doe, a clinical sexologist, and host of the YouTube show Sexplanations, about the front hole debate and how language like this works in practice.

Dr. Doe says that she chooses the language she uses based on context and intent. “Who am I speaking to and what am I trying to communicate?” she said. “When I’m teaching broad audiences I usually use the clinical names of anatomical structures but don’t link those to a person’s gender.”

“’Front hole’ is an example of language expanding for people to express themselves,” explained Dr. Doe. “It isn’t meant to negate vagina, the term, or vaginas, as organs which someone people really like. It’s meant to show compassion for people who are triggered by parts of language and still need to communicate.” There are a number of reasons why the word vagina might be triggering to someone, but much of the conversation around it has been about transgender inclusion. Some transgender men experience dysphoria because of their sex organs, and ‘front hole’ can help them to communicate about them to their partners, doctors, or therapists without triggering that dysphoria.

Dr. Doe offered examples of other ways a sexologist may use alternative language in their practice to help people communicate. “A non-sexual example of this is talking to a kiddo about a parent who severely abused them. By definition and common language I could say ‘your mom’ or ‘your dad’ but have found that some kiddos are much more comfortable using the person’s first name or even something like ‘meanpants’ when we have to talk about what happened or what’s going to happen,” she explained. “No one is saying that ‘mom’ is taboo and shouldn’t be used. We’re just inviting people to have more flexibility with what they say.”

There is always more that can be done to help people learn and communicate about sex. To those not versed in the details, it may seem like a game of semantics, but for sex educators and sexologists, it’s about helping people have a healthy relationship with their bodies, and with sex. “Genitals is also a controversial term. It comes from the root word gene to give birth, implying that these are the organs of reproduction,” explained Dr. Doe, giving another example of the complexities of sexology linguistics. “Yes, for some people that is true but for others those organs (meaning tools) aren’t for reproduction at all. Every word we use can be offensive, remember context and intent.”