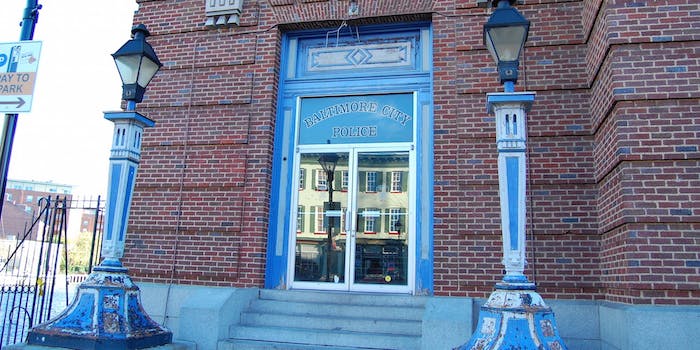 The video is previously unreleased and shows Gray motionless.

New video has emerged in the case of Freddie Gray, the 25-year-old Baltimore man who was fatally injured while being transported in police custody.

The footage, published by the Baltimore Sun on Wednesday, was shot by a bystander during one of the five stops made by the transport van before Gray arrived at the police station critically injured. The officers shown in the video are among the six who face criminal charges, ranging from false imprisonment to second-degree murder, in connection with Gray’s death.

The video was recorded on the cellphone of Baltimore resident Michelle Gross, who told Sun reporters she knew Gray, and even called him “son.” It shows Gray laying face down, halfway outside the police van, motionless, with his legs hanging off the back. Four officers are seen standing over him as his legs are placed in shackles.

Tearfully, Gross told the Sun, “I thought his leg was just broke and that he was just going to the police station and we would hear him that afternoon.” One of Gross’ neighbors, who remains anonymous out of fear of retaliation, filmed the stop at the corner of Baker and Mount St. using her phone.

Both Gross and her neighbor are heard in the video. To no avail, Gross tries to solicit a response from Gray. Her neighbor asks “Porter”—Officer William Porter, 25, who, if convicted, faces between 20 and 30 years in prison—to call for a supervisor. “Can we get someone else out here? This is not cool,” he says. “Do you hear me?”

According to the neighbor, Lt. Brian Rice, who was the supervisor at the scene, and the other officers then walked toward him, blocked his view, and told him to leave. Rice allegedly took out his Taser. A city surveillance camera that captured the neighbor filming the stop also shows three officers approach him.

The Baltimore Police Department previously reported that when the van left corner captured with Gross’ camera, Gray was “conscious and speaking.” Gray is seen neither moving nor or communicating in the Gross video, though, as the Sun points out, the footage is both short and grainy.

Photo via Tim Windsor/Flickr (CC BY 2.0)