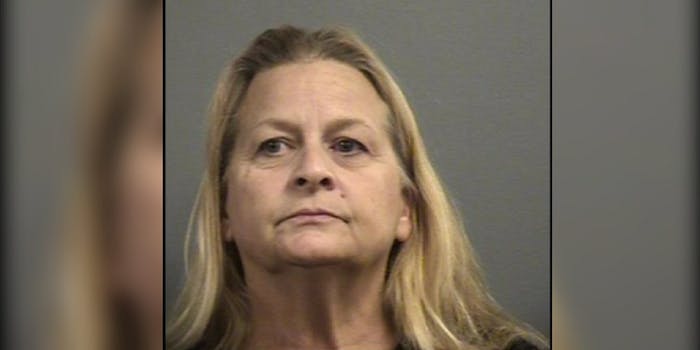 The woman in the photos had recently filed an emergency protective order against the offender's son.

A Louisville, Kentucky, woman has been arrested for spreading nonconsensual nude photos of her son’s ex-girlfriend at her granddaughter’s high school. A child of the ex-girlfriend also attends the school.

According to Louisville news station WDRB, 60-year-old Frances Joyce Bailey unlawfully entered Pleasure Ridge Park High School on Oct. 18 by following behind two students who had buzzed into the building. Louisville Metro Police say that once Bailey was inside, she threw photos of the woman onto the floor of a women’s restroom. Security footage shows Bailey leaving the school and driving around the parking lot, where more nude photos were left on the grass nearby.

Officials say Bailey had gotten the photos from her son’s phone. The woman in the photos had dated Bailey’s son, but had recently filed an emergency protective order against him, WAVE 3 reported, and had previously filed a criminal complaint against Bailey herself. Bailey reportedly came to the school because she was upset school officials had “spoken with her granddaughter,” though it’s unclear over what matter.

According to a statement from Jefferson County Public Schools, the photos were visible for “just a few minutes” before Pleasure Ridge Park students noticed them, gathered them, and took them to administrators. Bailey’s granddaughter told school employees she had nothing to do with her grandmother’s behavior.

“The incident was caught on videotape and PRP leadership worked with police during the investigation,” the statement read. “We have reiterated our school protocols to students and reminded them that they are not to let anyone inside the building.”

Bailey was arrested on Oct. 30 and charged with distribution of obscene matter, criminal trespassing, and harassment. She’s scheduled to appear in court on Nov. 9.