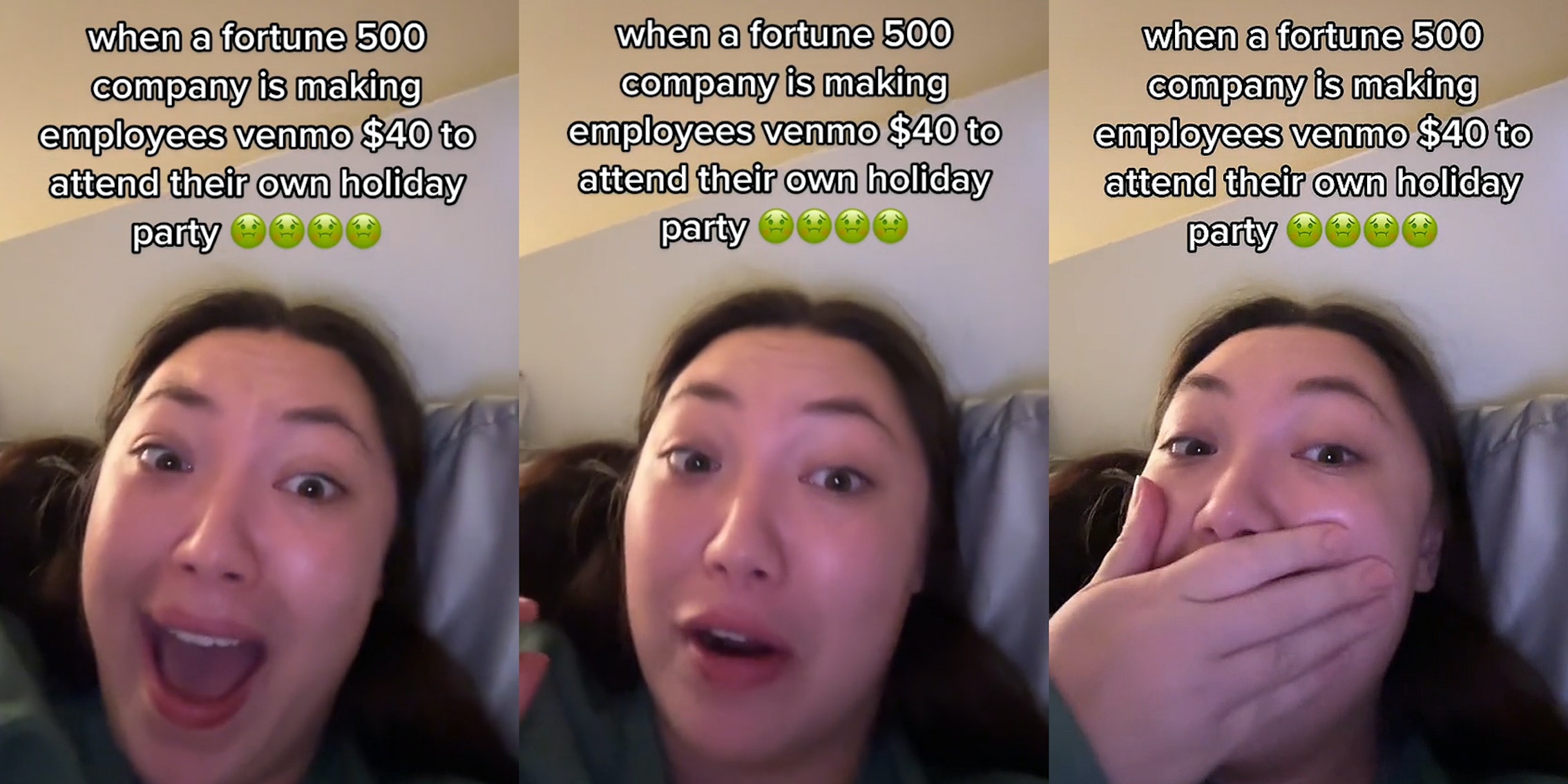 'I work for a company in the top 15, and we have to pay for parking at the building our company owns.'

TikToker Cheyenne (@cheynguyen) allegedly outed the Fortune 500 company she says her roommate works for. Cheyenne claims the company asked its employees to send them $40 if they planned on attending the company’s holiday party.

Cheyenne says in the clip while attempting to stifle her laughter, “My roommate works for a Fortune 500 company, and they’re making them Venmo $40 to attend their own Christmas party.” She ends the clip by letting out a scream.

Cheyenne also wrote in a text overlay of the video: “when a fortune 500 company is making employees venmo $40 to attend their own holiday party.” She followed the caption up by adding a ton of barf emoji to further solidify how she felt about the news.

The office politics of attending or not attending Christmas parties have been written about in several think pieces. CNBC wrote that, depending on the culture of the business you work in, not attending one could severely inhibit your career mobility. “As tempting as it may be to skip out on the forced fun and awkward colleague camaraderie that is a company holiday party, you should suck it up and go,” CNBC reported. The news organization cited a response from Johnny C. Taylor, CEO of the Society for Human Resource Management. According to CNBC, Taylor said, “There are certain organizations where your absence could be a career-limiting move. If it’s a place where you are expected to participate in all work matters and outside events, someone who is missing stands out.”

WoodsRogers.com offered up another perspective on the economics of attending holiday parties, stating that if companies are mandating its workforce to attend such a celebration, then that may constitute as hourly time they must be paid for. However, if the party is voluntary, a business may be within its rights to charge workers an entrance fee of sorts in order to attend.

However, viewers who saw Cheyenne’s post expressed that they thought it was in poor taste of her roommate’s company to ask its workforce to pay $40 a head in order to attend a work event. “I would literally not go,” one suggested.

“I work for a bottom 500 company and we get an open bar,” another quipped.

Another even resonated with Cheyenne’s video, writing, “I work for a company in the top 15, and we have to pay for parking at the building our company owns.”

The Daily Dot reached out to Cheyenne via TikTok comment for further information.