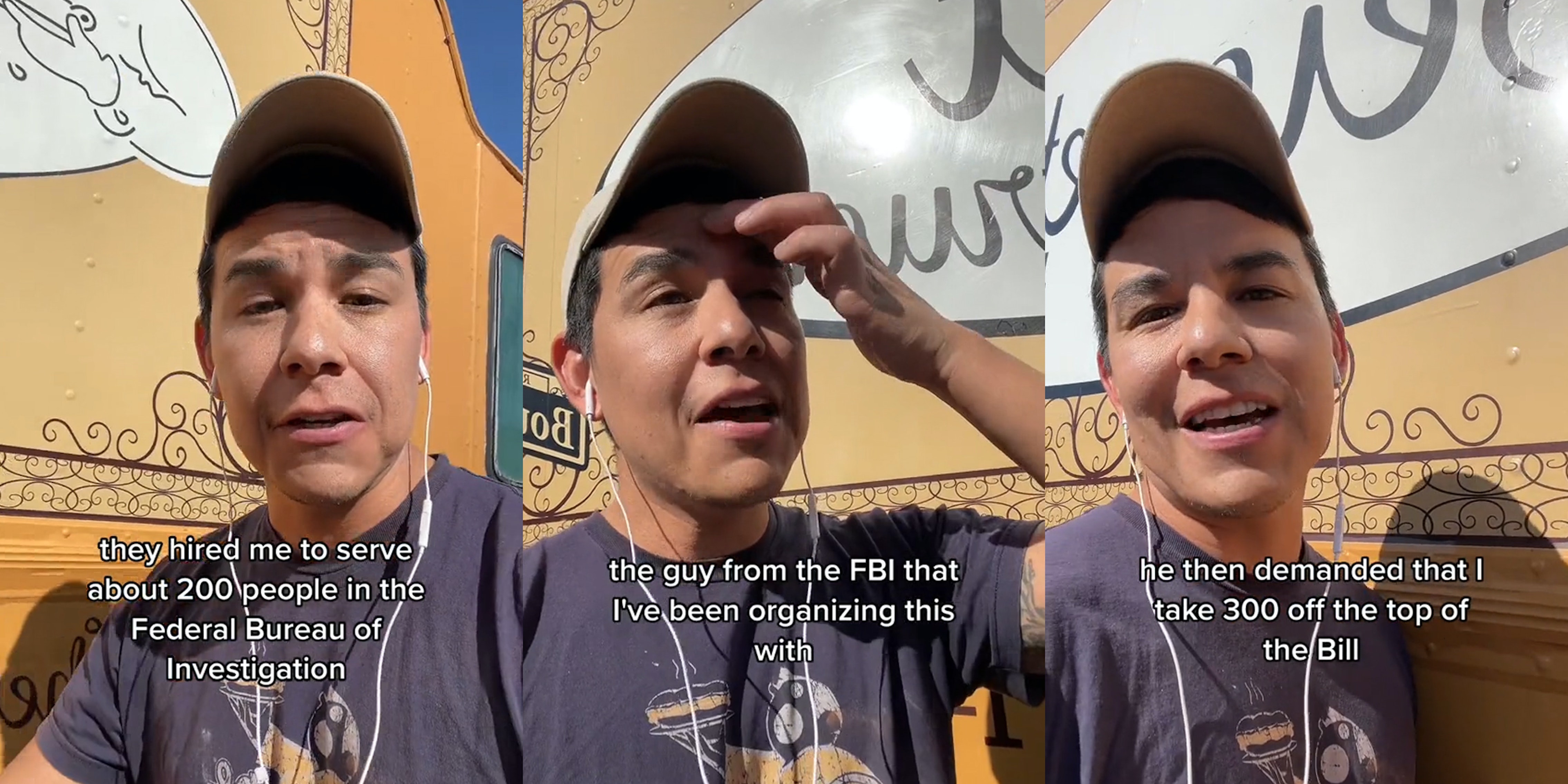 ‘Bro got scammed by the FBI. I’m done with America’: Food truck owner says FBI forced him to take $300 off the bill

'I'm a small business, and taking $300 out of my pocket being a large government agency doesn't seem fair.'

A food truck owner says that an FBI employee called him “incompetent” and demanded that he take $300 off of the bill because there was a line at an event with over 200 attendees in a now-viral TikTok.

In a video posted by user Chris Bautista (@bautistud) on Nov. 23, he stitches a video in which another TikToker asks others to share a “ridiculous thing you had to explain in customer service.”

Bautista says that “a few years ago,” the FBI hired his food truck service, The Beignet Truck, to serve at a “two-hour” event with over 200 people.

“I roll up to this event, and all 200 of these FBI people roll up to my food truck. So obviously, there’s going to be a large line,” Bautista says in the clip. “The guy from the FBI that I had been organizing this with starts freaking out at me. I then had to explain to him how lines work.”

He says that he had offered to serve “pre-made” items at the event to avoid creating a long line, but the FBI organizer said he wanted all food made “hot and fresh to order.” He continues that the organizer then said that he wanted them fresh to order but “didn’t want there to be a line.”

“I then asked him, ‘What can I do to make you happy?’ He then demanded that I take $300 off the top of the bill,” he says. “I said, ‘Hey, I would love to make you happy, but I’m a small business, and taking $300 out of my pocket being a large government agency doesn’t seem fair.'”

Bautista says that the FBI organizer began to “berate” him with “a bunch of insults,” calling him “incompetent” and threatening not to pay him at all.

“I then had to take the $300 out of my pocket and give it to the Federal Bureau of Investigation because they didn’t understand the concept of a line,” he continues. “I guess I just figured that the FBI would have a concept of how the world works.”

The video has reached over 1.6 million views as of Tuesday, with commenters putting the Bureau on blast for mistreating a small business owner. Several accused the organizer of “scamming” Bautista.

“Bro got scammed by the FBI. I’m done with America,” one user wrote.

“He straight pocketed that money. He knew, and it was his plan all along,” another said.

“A big establishment like that would have already taken the money out to give him to give to you. He pocketed it,” a third added.

Other catering company owners shared their own experiences working at large company events.

“Having worked with plenty of agencies, this is typical. Anything that makes sense and would be efficient is a no-go for them,” a commenter said.

“The number one complaint I get in my job is about lines too! Wouldn’t you rather have great, hot quality food than cheap cold food?!?” another wrote.

In a phone call with the Daily Dot, Bautista clarifies that he doesn’t know if the event was budgeted by the FBI or if someone within the organization was “picking up the tab.” He adds that he had never had this experience before in his “ten years” in catering, saying that he has served up to “2,000 people” at private events.

“I know exactly what I’m doing. I have full capabilities to serve up to 500 people in two hours. This was just another day,” he said on the call. “But having a large agency take advantage of a small business is alarming.”

The Daily Dot reached out to the FBI via email.