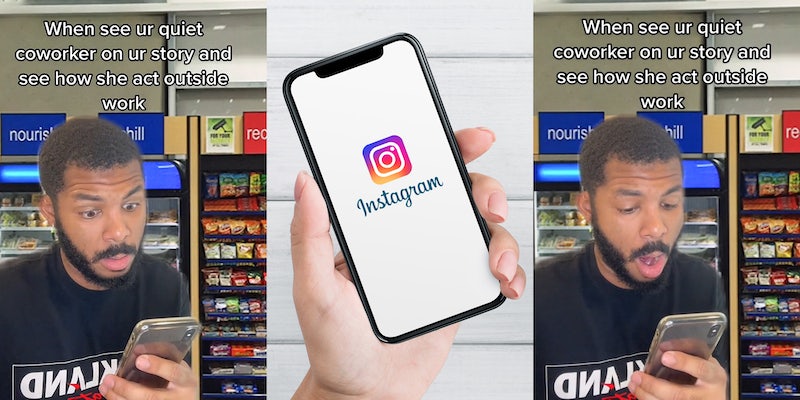 ‘That’s why I like blocking my coworkers, no need for them to know the truth’: Costco worker’s reaction to quiet co-worker’s social media account sparks debate

'I don't need them knowing who I really am.'

A Costco employee went viral on TikTok, portraying a scenario of seeing how his co-worker acts outside of work on Instagram. His video sparked debate in the comments about whether or not one should follow their co-workers on social media.

User Chad (@chaadcrb) typically posts content about his job at Costco, showcasing hypothetical scenarios he experiences on the clock. In this viral video with over 828,000 views, Chad records his reaction after seeing his co-worker on social media.

“When you see your quiet coworker on ur story and see how she act outside of work,” he wrote in the text overlay, making a shocked expression as he pretends to watch a wild Instagram story on his phone.

In the comments, some viewers claim to be the quiet coworker in question who acts completely differently outside of work.

“Everyone was shook when they saw the real me outside of work,” one user said.

“I ain’t the same person at work & oustide fr,” a second stated.

“It’s my coworkers be snitching that’s why I’m quiet,” a third wrote.

Others used the video to voice their opinions on sharing their social media accounts with co-workers.

“This is why I lie and say I don’t have ig at work I don’t need them knowing who I really am,” one person commented.

“I don’t add my coworkers on NOTHING I don’t need them telling my business to NO ON,” a second said.

“That’s why I like blocking my coworkers No need for them to know the truth,” a third shared.

The Daily Dot reached out to Chad via TikTok comment.