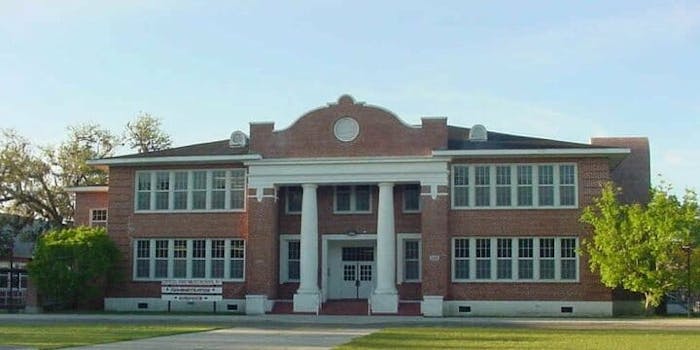 All of her social media accounts have reportedly disappeared.

This is a tumultuous time for teachers in America. Thousands of educators in West Virginia have been on strike for more than a week to petition for better pay and benefits. On the other end of the spectrum, one Florida public school teacher reportedly has been secretly hosting a white supremacist podcast and trying to convince students to adopt her views, according to the Huffington Post.

The website reported Saturday that Dayanna Volitich, a 25-year-old social studies teacher at Florida’s Crystal River Middle School, has been hosting the Unapologetic podcast under the pseudonym “Tiana Dalichov.” On the latest episode from Feb. 26, Volitich boasted about sliding her ideology past school administrators, while also agreeing with a guest who insisted that white supremacists need to infiltrate public schools to “be more covert and just start taking over those places.”

Exclusive: A middle school teacher has a secret life as a white nationalist and suggested that she brings her views into her Florida classroom. https://t.co/J5XO4M96ih

HuffPost inquired about Volitich’s ideology to the Citrus County School District on Friday. “Tiana Dalichov” then tweeted that she “might disappear for a while” and has since deleted her account. But HuffPost took screenshots of several of Dalichov’s tweets, in which she asserts that “systemic racism and white privilege aren’t real,” and “it isn’t supremacist or hateful to prefer your own people over others.”

Volitich has evidently removed the Unapologetic podcast from SoundCloud, but several episodes are still available on tunein.com, including the Feb. 26 episode (on which she also criticizes “safe space bullcrap” on college campuses and argues that “feminism is cannibalizing itself”). You can hear the discussion about white supremacists infiltrating schools below, around the 29:45 mark.

“Tiana Dalichov” did not respond to HuffPost’s requests for comment on Facebook or Twitter. Scott Herbert, executive director of educational services for the Citrus County School District, could not confirm her identity but told the publication the district “will be looking into the statements she made, checking the validity to see if they violate our code of ethics and policy.”

Update 10am CT, April 3: On Monday, Citrus County School District Assistant Superintendent Mike Mullen said he received Volitich’s resignation. However, it won’t be final until the board meets on April 10, according to CNN.

Shortly after the story broke, on March 2, Volitich was “removed from the classroom” by the school district. “The Human Resources department was notified and an investigation was initiated immediately,” Superintendent Sandra Himmel said in a statement at the time.

Though Voltich has confirmed she was the one speaking on the podcast, she called it “satire.”

Voltich’s lawyer had no comment for CNN regarding her resignation.