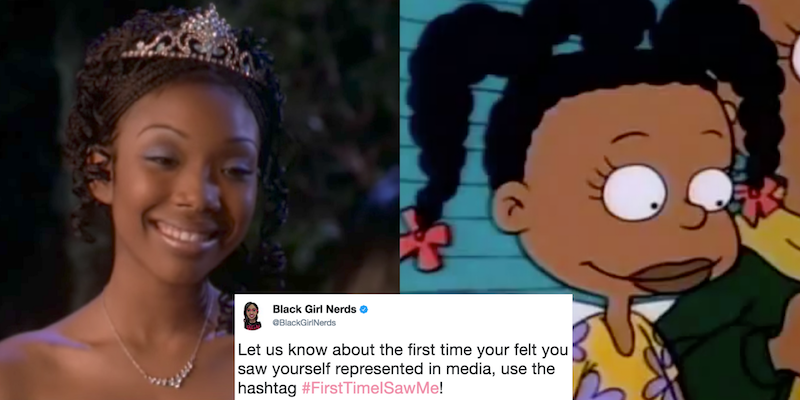 Some women are still waiting to someone that looks like them on TV.

Something special happens when you’re a kid and you find someone in media—be it on TV or in the movies—who you feel truly represents you. It’s comforting at the least, and empowering at the greatest, to watch someone who you feel you could grow up to be some day, even if it’s a cartoon character in a middle school sitcom.

But for those of us who don’t fall into the categories of populations most often depicted in media (straight, white, able-bodied cismen, and less often, ciswomen), the lack of representation can do the complete opposite—make you feel isolated and lonely, left to navigate your own reality without the assistance of a fictional character.

Yes, that’s a pretty dramatic depiction of how underrepresentation can affect young girls, but I know that to be my own reality in looking for mixed families on TV, and I’m not alone.

In a collaboration with Netflix, Black Girl Nerds, an online community for “nerdy” black women, had a chance to recount some of their own memories of media representation. Using the hashtag #FirstTimeISawMe, they encouraged other women to share the first time they recall seeing themselves in media.

BGN had an amazing chance to collaborate with @netflix for #FirstTimeISawMe, where we chat about the first time we saw ourselves in media. pic.twitter.com/Y0nAApQ6tO

Let us know about the first time your felt you saw yourself represented in media, use the hashtag #FirstTimeISawMe! pic.twitter.com/dSdFcFsMvX

While Joi, Connie, and Kay-B, women from Black Girl Nerds, saw themselves in black female characters from the Marvel universe and Dear White People, Twitter users threw it back to their own childhoods in which Brandy brought Cinderella to life, and Susie Carmichael from Rugrats showed how important leadership was in the face of scheming Angelica Pickles.

#FirstTimeISawMe was @4everBrandy as Cinderella. Had such a positive impact on my childhood and still to this day tbh. pic.twitter.com/rpve7sAa78

#FirstTimeISawMe – Susie Carmichael from Rugrats. Black girl from a two-parent household that always had Angelica SHOOK! An icon. pic.twitter.com/4oK9jpTNTP

I was only a baby when the movie came out but it was all I watched as a kid. Troy set a high bar for my expectations. #FirstTimeISawMe pic.twitter.com/Aq8QaYQ0Ya

Gotta be Cherry on Punky Brewster. Her friendship with Punky was like the one I had with my white best friend. #FirstTimeISawMe pic.twitter.com/E2JpkejrBK

@BlackGirlNerds #FirstTimeISawMe When I saw Vanessa Huxtable.. I was a bratty little sister too pic.twitter.com/VbWfxNmMH7

Gina Torres on Xena was one of the first I remember, besides those already mentioned of course! #FirstTimeISawMe pic.twitter.com/O0G9Wv0gfo

#FirstTimeISawMe was Raven Baxter from That's So Raven. A plus size, Black girl who was represented the fashion icon I wanted to be at 10!! pic.twitter.com/wYDY5yTVoe

#FirstTimeISawMe Shana via Jem. She blew my mind. Not only did she have a fro .. . that thang was PURPLE! And she killed it on the drums. pic.twitter.com/ClhYCktHt3

#FirstTimeISawMe was in middle school, when the show Daria introduced Jodie Landon. pic.twitter.com/JAcaOJ4TWf

In addition to black women, other women of color and women of underrepresented religions joined the conversation, showcasing just who else media has underserved over the years.

#FirstTimeISawMe was when I watched @TheMindyProject and seeing the lead be a brown woman who wasn't just used for a punch line.

Might be cliche but Disney's Mulan was the first time I saw and heard myself represented. I was about 5/6 years old #FirstTimeISawMe https://t.co/6NfuAcYc1G

Of course, some women pointed to the reality that they still have yet to see one character that represents them at all.

As long as Hollywood uses non-disabled actors in disabled roles & whitewash POC characters, it'll be a while b4 I can say #FirstTimeISawMe