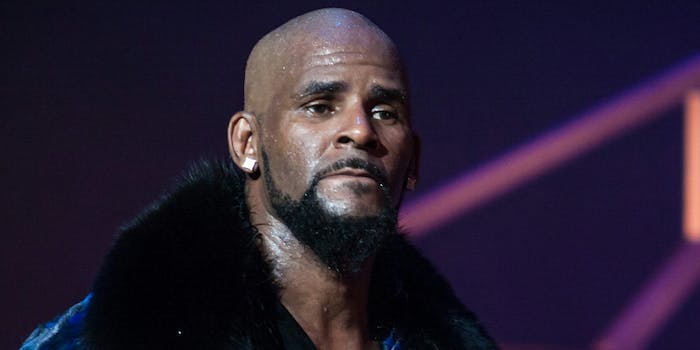 R. Kelly supporters are using #FirstThem to protect him

The hashtag is being used to deflect from the harm he caused Black girls.

Surviving R. Kelly is the docuseries that no one can stop talking about, for good reason.

The six-part Lifetime series, which aired earlier this month, highlighted the immense scale of the mental, sexual, and physical abuse inflicted on underage Black girls by R. Kelly. After decades of allegations without much consequence, response to the docuseries happened swiftly: The Georgia police opened an investigation into Kelly, his shows were canceled and denied permits, other musicians withdrew their collaborations with him, and most recently, his record label, Sony, dropped him.

Meanwhile, though, another movement has been brewing on Twitter—and it’s having a counter effect.

The #FirstThem hashtag aims to bring light to other musicians and artists, predominately white ones, who were once “romantically involved” with underage girls (aka committing statutory rape) and went unnoticed. On the surface, calling out predators who got a pass seems valuable in showing the pattern of men getting away with harming young girls.

R Kelly has done some really bad things. The media told us to hate him. The truth is that many came before him that need to be put on blast. Dwight Man been raping for over 400+ years. #FirstThem #iStayWoke

We've said everything there is to say about @rkelly @chrisbrown and @michaeljackson now it's time to talk about the countless number of violent, predatory white actors in Hollywood #FirstThem

But the hashtag has since spiraled into a defense for Kelly, with many saying that the R&B musician is a “smokescreen” to distract from allegations of abuse against white men.

As soon as they lynch mob, inquisition style "America's Dad"Bill Cosby. I knew R.kelly was next. This is all an excuse to kill the Voice of God in our midst. Min-Farrakhan.
We see you SYNAGOGUE of SATAN #FirstThem

#Firstthem not talking bout R Kelly until we address all the pedophiles in Hollywood. First Them

We ALL know about R. Kelly's investigation but just so you know…Kevin Spacey pleads not guilty for groping a 18yr old male in a bar. The LGBT love 2 spearhead hashtags like #MuteRKelly yet they didn't create one 4 one of their own. #FirstThem #WhosNext https://t.co/w6HFGjdyHP

Though it’s not clear who started it, there is a website for the #ThemFirst movement that refers to the #MeToo movement as a “corporate agenda” that’s been “racially tailored.” It’s been rumored to be the brainchild of media personality Tariq Nasheed, as he has shared numerous tweets as well as Facebook posts with the hashtag, calling out other artists who have a record of sexual abuse against minors. (Neither Nasheed nor the First Them movement responded to the Daily Dot’s requests for comment.)

It isn’t that the hashtag is unfounded in highlighting racial injustice: Black men are significantly more likely to be imprisoned than white or Latino men. But the “smokescreen” narrative is problematic as it implies that Kelly—who carried on his abuse in near-plain sight for almost three decades without much fallout—is now having to face consequences because he is Black, not because he has allegedly raped dozens of young girls. That isn’t to say white predators shouldn’t be called out and held accountable too—all predators should. But the diversion implies that Kelly should be protected and that his crimes do not matter.

In fact, Surviving R. Kelly sparked a lot of conversation about the intersection of race, sexual abuse, and protecting (and not protecting) those in one’s community. As Jelani Cobb wrote aptly in the New Yorker: “There’s a gulf between the accusations directed at Harvey Weinstein, Matt Lauer, and Les Moonves—wealthy white men whose alleged excesses were understood as a prerequisite of their status—and those directed at Bill Cosby and R. Kelly, Black men for whom success represented some broader communal hope that long odds in life could be surmounted. Cosby and Kelly know this, which is part of the reason that they were so effective at manipulating public sentiment around their various accusations.”

Then there are Kelly’s victims: underage Black girls. Experts who testified in the exposé repeatedly stressed that a big reason why Kelly went years without being held accountable for his crimes is because his victims were Black girls, for whom society didn’t prioritize justice.

The #FirstThem hashtag, in this way, takes away from that narrative by again putting the focus on “poor Kelly,” not the young Black girls who were his victims.

This brand of thinking is exemplified in Nasheed’s long response to the series, in which he noted it was Black girls who had been Kelly’s biggest supporters. He specifically called out Kelly’s song “Age Ain’t Nothing But a Number,” saying in his experience, it wasn’t a sentiment that Black men expressed, but that high school girls said.

“They’ve been trying to flip that narrative about this R. Kelly thing from day one,” he said. “They’re trying to make it seem like Black men allowed this to happen.”

Many are pushing back against ideas like Nasheed’s and the implications of #FirstThem.

“What about the white men” nah we talking about about a black man who terrorized a whole black community of underage girls in Chicago. Fuck R. Kelly and anybody that thinks he doesn’t deserve what he’s getting. #FirstThem

Lol i seen a video of him explaining #FirstThem and my thing is why lol why can’t it be “lock up R Kelly’s ass and lets focus on these other guys as well” but instead you downplay what’s happening and as a result your protecting Kelly https://t.co/FbBz8cwdco

This Tariq Nasheed guys is looking like more and more of a closet R. Kelly supporter with every #FirstThem tweet he tweets. Blocked.

So all white pedophiles must be arrested before we can go after R. Kelly? Shouldn't they just all be taken down as they are found out? And it's funny that a lot of his #FirstThem posts are about dudes getting arrested. The whole idea is dumb. Idk why he's defending R. Kelly.

“Tariq Nasheed and the #FirstThem hashtag are classic examples of people parroting convoluted, circular logic to avoid dealing with cold, hard, linear facts. The idea that Black people should be more concerned with dealing with sexual predators outside of their community, than the ones inside of their community, is both illogical and self-defeating,” Oronike Odeleye, co-founder of #MuteRKelly, the worldwide movement to boycott Kelly, told the Daily Dot.

She added that the #MuteRKelly movement, which has seen resounding results over the past year, “centers the Black community and Black, female victims as important.” However, Tariq Nasheed and his followers “are of the mindset that Black predators should get away with their crimes because some white perpetrators do. THIS is the equality and justice they think our ancestors fought for. They are not interested, as they claim, in dismantling the systems of oppression that subjugate us. They’re only interest is gaining a position of power within those systems.”

Editor’s note: Updated to include comment from #MuteRKelly and clarify language around the purpose of #FirstThem.