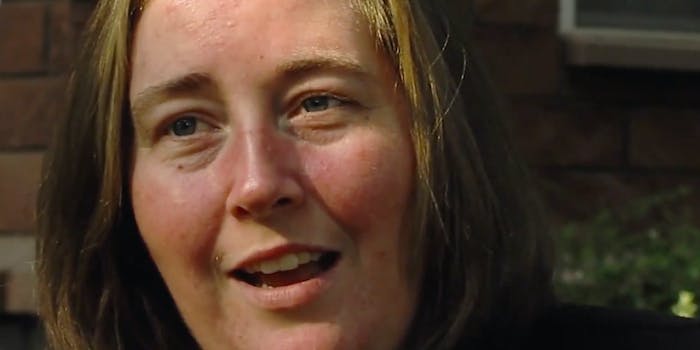 It can be hard to keep track of all the Karens and Kens crawling out of the woodwork these days.

Videos of irate people, primarily women, whose immense entitlement earns them the title of Karen have been a staple of quarantine life. Most of the Karen videos we’ve seen in recent months have emerged due to the mask-wearing mandates necessitated by the coronavirus pandemic that has killed 199,018 Americans as of Tuesday morning.

News coverage from a late August anti-mask rally in St. George, Utah is elevating an all-new Karen to the heights of anti-masker entitlement. In an interview with ABC4, Karen—whose real name is Shauna Kinville—compared wearing masks to George Floyd’s death.

A clip of Karen’s staggeringly tone-deaf statement made its way to Reddit, where it has rocketed to the top of the site’s r/FuckYouKaren subreddit this morning. There, she has been deemed “Final Boss Karen.”

There is no evidence to support claims that masks can be hazardous to our health. Despite this fact, and the clear evidence that mask-wearing does help slow the spread of COVID-19, anti-maskers have been flooding our social media timelines since the start of the pandemic.

Even in this sea of hysterical, insufferable Karens, however, Final Boss Karen’s statement is dumbfounding. Floyd was killed by police in May after officers pinned him down and knelt on his neck for 8 minutes and 46 seconds. He pled with police as he died, repeating over and over again that he couldn’t breathe.

Viewers were staggered by Karen’s use of this harrowing example of police brutality to excuse the blatantly selfish behavior displayed in the news clip. They tore into her in the comment section of the Reddit post. “So, according to her, having a 170lb+ male pinning your neck is the same as a piece of cloth,” user RedJarJohnny wrote.

“The difference is that George Floyd was being pinned down where he couldn’t actually breathe,” another commenter noted. “You’re just being overly dramatic and selfish.”

Anti-mask rallies continue around the nation, as our most selfish citizens ignore public health for their own constant comfort. While they are a clear minority of Americans, the continued actions of anti-maskers have slowed U.S. progress toward eliminating the virus entirely. Until we can all accept our civic duty to respect one another and wear a mask, COVID-19 will continue.