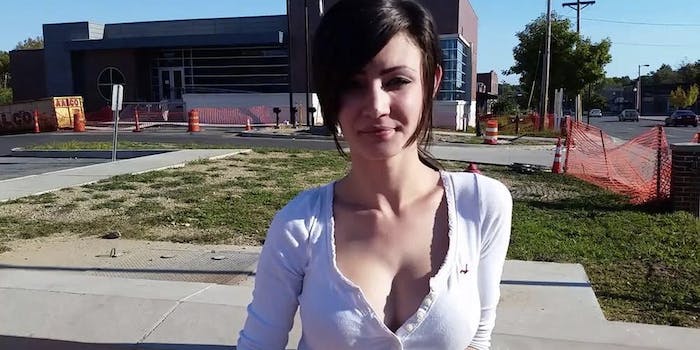 Sasha Pain (or @CaptnThunderCunt, as she goes by on Twitter) is a webcam girl (NSFW), filming clips for fans and regularly performing on streaming platforms like Chaturbate. But now she’s taking on another position as an informal news correspondent from Ferguson, Missouri, filming the current protests and streaming them for her fans on Ustream.

According to the Riverfront Times, Pain drove more than 36 hours from San Francisco to participate in the protests, which continue to rage in the town nearly two months after the shooting death of Michael Brown by a local police officer. When she arrived with her boyfriend and journalist Jessica Hollie last Saturday, tensions in Ferguson had escalated, with two police officers being shot in a burglary and on the highway. (Officials say neither incident was connected to the Michael Brown case and the current protests in Ferguson.)

The mother of a three-year-old, Pain was inspired to join the protests after following the case and becoming enraged by the media’s treatment of Brown.

“I’m out here because I feel like it’s my responsibility to at least reach [my friends and family] and then they can pass it on,” she said in a video interview with St. Louis local Umar Lee, who is also posting footage from Ferguson. “The fucking media is lying to people right now, so I’m here to stream and spread the truth so everyone can be mad about it too.”

While Pain is streaming in Ferguson, she’ll also continue to cam for her fans, donating the proceeds to her fellow protesters for food and supplies. She’ll also be selling custom clips and panties to fans to pay for gas masks and First Aid supplies to protect the protesters from police tear gas.

But while she’s come up with a unique method of funding her activist efforts, she doesn’t want her profession to detract from the work her and other protesters are doing in Ferguson. “I’m here as an upset mother, not a sex worker,” she told the Riverfront Times. You can follow Pain’s reporting from Ferguson on Ustream, or follow her on Twitter.