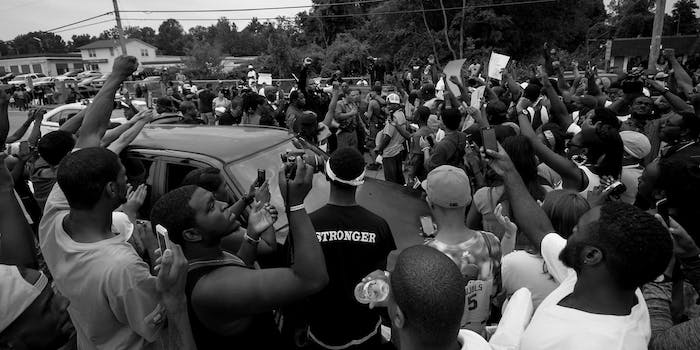 What everyone gets wrong about violence in Ferguson

It's not the protesters we should be condemning.

The mood in Ferguson, Mo., feels like a calm before a storm. The icy streets are quiet, but whispers abound as all ears are hanging on for news of an announcement, any sliver of information, about the fate of Darren Wilson.

The grand jury in Missouri is expected to soon announce whether to indict Wilson, a Ferguson police officer, for the August shooting death of unarmed African-American teenager Michael Brown that sparked months of protests.

Many fed-up Ferguson residents expect a ‘no‘ on whether to indict and charge Wilson for Brown’s death. And still, rumor after rumor flies through the community; rehash after rehash, speculation about the speculation—this is the state of Ferguson right now, as the widely anticipated grand jury decision hangs in the balance.

Despite the complete lack of riots taking place in Ferguson, Missouri Governor Jay Nixon declared a State of Emergency on Monday afternoon. While many online decried the injustice of Nixon’s preemptive strike, the news landed with little surprise or clamor in Ferguson. Locals described their reaction as “numb.” They knew this was coming, and it changes little.

The disconnect between what you see online about Ferguson and what is actually happening on the ground has come to define this period of waiting for the grand jury hammer to drop. The only threats of violence taking place are happening in the media, in anti-protester communities, and on the Internet itself.

The most high-profile battle being waged over Ferguson right now is between members of the Ku Klux Klan, who openly threatened to “use lethal force” against Ferguson residents, and the Anonymous hacktivists who fought back against the racist group.

No one knows who started the war, but Twitter collectively opined that it was probably the white-hooded members of the Ku Klux Klan, an organization with a decades-long history of lynchings, murder and hatred of black people that fired the first shots.

The assault began on Twitter with the standard tacitly racist crudities, and soon escalated to open threats to shoot “them Ferguson animals.” Then Tiffany Willis, editor-in-chief of the blog Liberal America, received a threatening voicemail from a member of the Klan.

It didn’t go so well for the Klan. As sane people everywhere started becoming rightfully horrified at the racism on full display, Anonymous turned the tide by jumping into the ring with their reprisal, dubbed “Operation KKK.”

Hacks revealing the identities and personal information of several active KKK members went viral, passing 35,000 tweets per day at last count, and showed no signs of letting up. Anonymous proclaimed it had taken down four KKK websites.

In their signature lunatic-jester bravado, Anonymous put the Klan in its place with its typical smirking doublespeak in a communiqué: “We don’t threaten, we promise. … Back away now, lest our wrath should befall you.”

The KKK, getting pretty red in the face with their #HoodsOff, decided to play chicken with Anonymous.

Anonymous is nothing but a bunch of wannabes. They won’t take any action. We will not be brought down by some low-lives behind a screen.

They lost in epic fashion.

Just hours after the Klan was talking talking tough on one of its official Twitter accounts, Anonymous brought forth sweet justice and seized control @KuKluxKlanUSA. 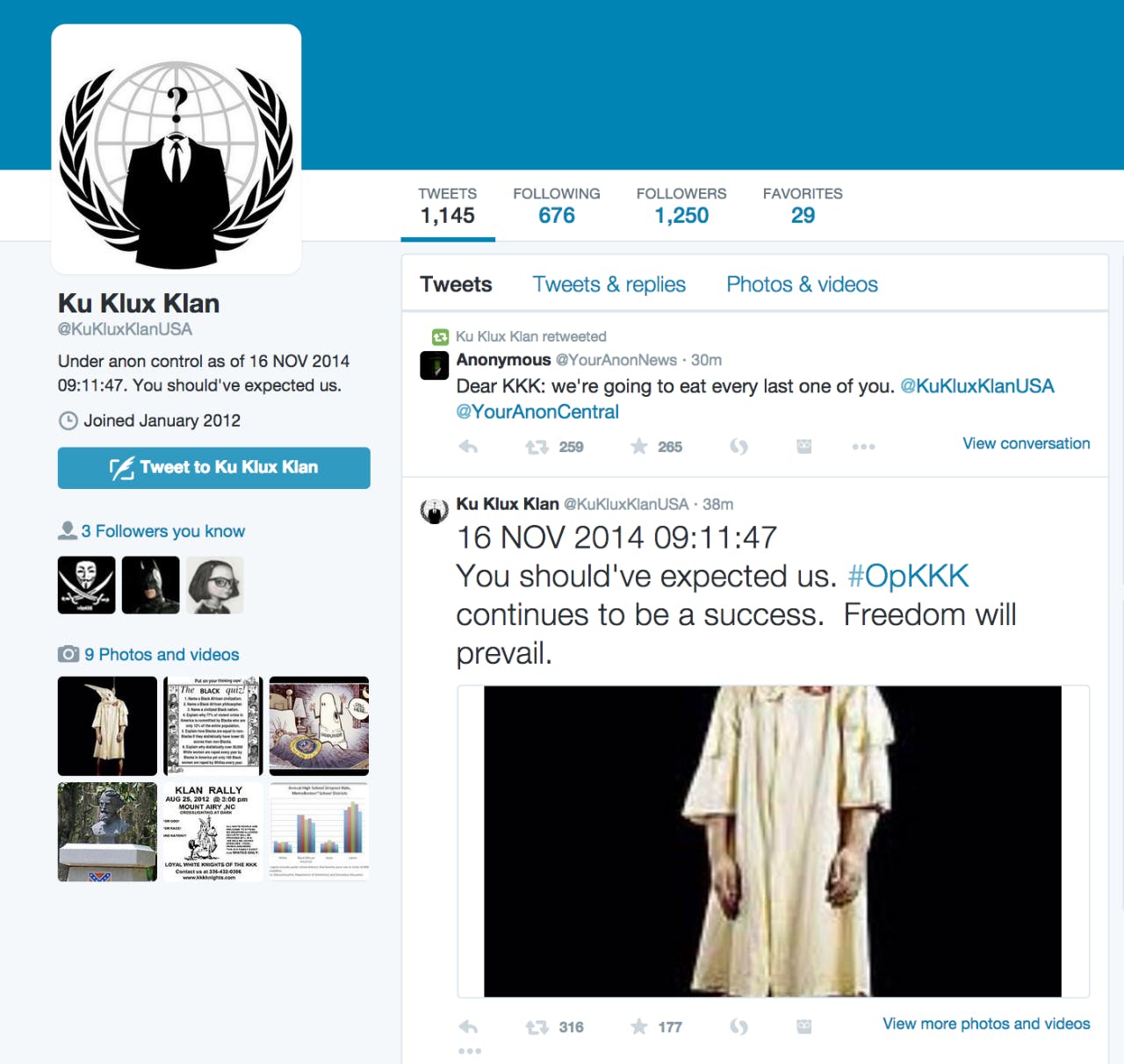 Anonymous’s intervention against the KKK—an organization pretty much everyone except MSNBC’s Chris Hayes agreed has no place in modern civilization—have been widely effective at calling online attention to the provocations that Ferguson protesters say they’ve been living through for weeks.

Residents in Ferguson, who say they’re here building a movement to urge the nation into confronting its ongoing legacy of structurally-embedded racism and police violence, charge that the media has painted them as everything from lazy to savage criminals. Using tactics of from a time-worn playbook, they’ve been separated into ‘good protesters’ and ’bad protesters.’ Meanwhile, the media keeps a steady drumbeat warning of looming mob violence. By labeling the people of Ferguson—who have reacted with understandable outrage at the killing of an unarmed teen—as a crazed mob liable at any moment to break out into random, directionless rioting, the media is helping to generate much of the fear that it’s reporting on.

“If you’ve been paying attention, there hasn’t been no looting, no violence, we’ve been completely peaceful,” St. Louis-based citizen journalist Bassem Masri said in a recent interview with CNN.

While regular protests have been going virtually non-stop since August—most of them have been rather tame—the possibility of actual violence sparked calls to organize armed militias “made up of citizens unwilling to allow innocent people to become victims and our cities to burn,” as one of the groups describes it—a factor largely absent from the mainstream media’s coverage of Ferguson.

Guiles Hendrik, a member of the apparently “prepper”-inspired and Libertarian-leaning group Last Minute Survivor, confirmed in an email to the Daily Dot that his group was indeed planning to “take up arms” and establish a “civil defense force” to defend “innocent citizens, residents, and business owners.”

Further stoking the flames during an already-tense moment, CNN ignored non-violence trainings at Ferguson churches, and instead reported that gun sales were spiking in Ferguson while residents anxiously awaited news of the grand jury’s decision.

On top of the media’s terror, police are also ramping up the fear on and off the streets. Vocativ reported that police had been found to be encouraging each other in a forum called St. Louis Coptalk: “If you do not have a gun, get one and get one soon,” wrote a user, who called himself “A Concerned Cop,” in late October.

It’s palpably clear from speaking with locals here that they’re frustrated by a media narrative that ignores their voices and conviction while incessantly fixating on instances of violence with a malicious disproportion. The hysterical drip of news heightening the anticipation  layers vilification upon the protesters, putting all eyes on them and causing panic that riots will break loose, with a feverish tenor of fear-mongering practically putting popular upheaval on the level of a zombie apocalypse.

A conversation I got into at the bus stop captures the emotion of the vox populi here in St. Louis:

X-Ray, 18: “You have racist, hood-wearing KKK wizards on TV, and they’re making us look like terrorists because some dude throws a water bottle during a protest.”

Hendrik said that Last Minute Survivor condemned the property destruction at protests, which he called ‘violent,’ and attributed it to opportunistic fringe elements “using the legitimate backdrop to assemble” to start a riot—but he also rebuked the “heavy-handed police actions so abhorrent to a free nation” and advocated self-defense without overtly racist overtones.

And finally, here’s a unicorn :) pic.twitter.com/1QW0ECu4UI

The online riot taking place on the nation’s digital streets marks a strategic development, and a rare instance of online activism taking its cues from real life, rather than the reverse.

As officials line up to chastise and prepare military weaponry for riots that haven’t yet happened, Gov. Nixon warned: “Violence will not be tolerated.” His words backfired on Twitter with the hashtag #ViolenceWilNotBeTolerated going viral, hitting 8,000 tweets on the day the governor declared a State of Emergency.

Community leaders in Ferguson say that what America needs to look at is “the real violence” that is going on. As Reverend Osagyefo Sekou said in an interview: “We should be celebrating the fact that there isn’t a riot every 28 hours over the black and brown lives being taken.”

It remains to be seen whether the next act in the Ferguson saga will see more violence from the militarized police or from white supremacist vigilantes. Whether it will be a repeat of the August crackdowns, or a struggle against the ghosts of racism alive today in domestic terror organizations like the KKK, little has managed to diminish the resolve of those seeking justice.

It’s been a long 100 days. And we’re still here. Because freedom ain’t free. We protest. #Ferguson