This is not the end, it's the beginning.

After weeks of popular anger, a coalescing moment of popular discipline.

Organized groups, both old and newly formed in response to the killing of Mike Brown called for a “Weekend of Resistance” as part of a Ferguson October initiative to bring thousands to the segregation-stale Missouri town just outside of St. Louis. Relentless actions clamoring for justice and systemic change spanned from Thursday through to Monday.

Though the National Guard rifles and tanks seen in August were gone, Ferguson and St. Louis protesters joined by up to 2,000 people from out of town met with a continuously militarized police force. Crowds bellowing by the hundreds for the arrest of Mike Brown’s killer, Darren Wilson, were met with almost a hundred riot police banging their batons against their shields.

Day after day, protesters kept up the pressure, renewed with fury at another police killing, this one of VonDerrit Myers, an 18-year-old of the Shaw neighborhood of St. Louis. The black teenager was shot on October 8 by a white policeman just 17 miles from where Mike Brown was killed on August 9. With the hot sun that beat down on Mike Brown’s body for four hours faded to a wet-grey October sky, protesters launched one demonstration after another, spanning five days of street protests.

Banners and signs held by protesters appeared on city plazas, neighborhood streets, on highway overpasses, at city hall, and in downtown St. Louis while the Cardinals played their playoff games. Locals have been protesting nightly at the Ferguson Police station for over 60 days, demanding justice for Mike Brown, repeating the popular chant: “Indict! Convict! Send that killer cop to jail!”

On Friday night, the first protesters arrived in town for Ferguson October for a march departing from the tree-lined suburban Shaw neighborhood, where teddy bears and handwritten messages memorialized VonDerrit Myers, killed just two days before. Together they marched and were met by riot police and a SWAT vehicle. 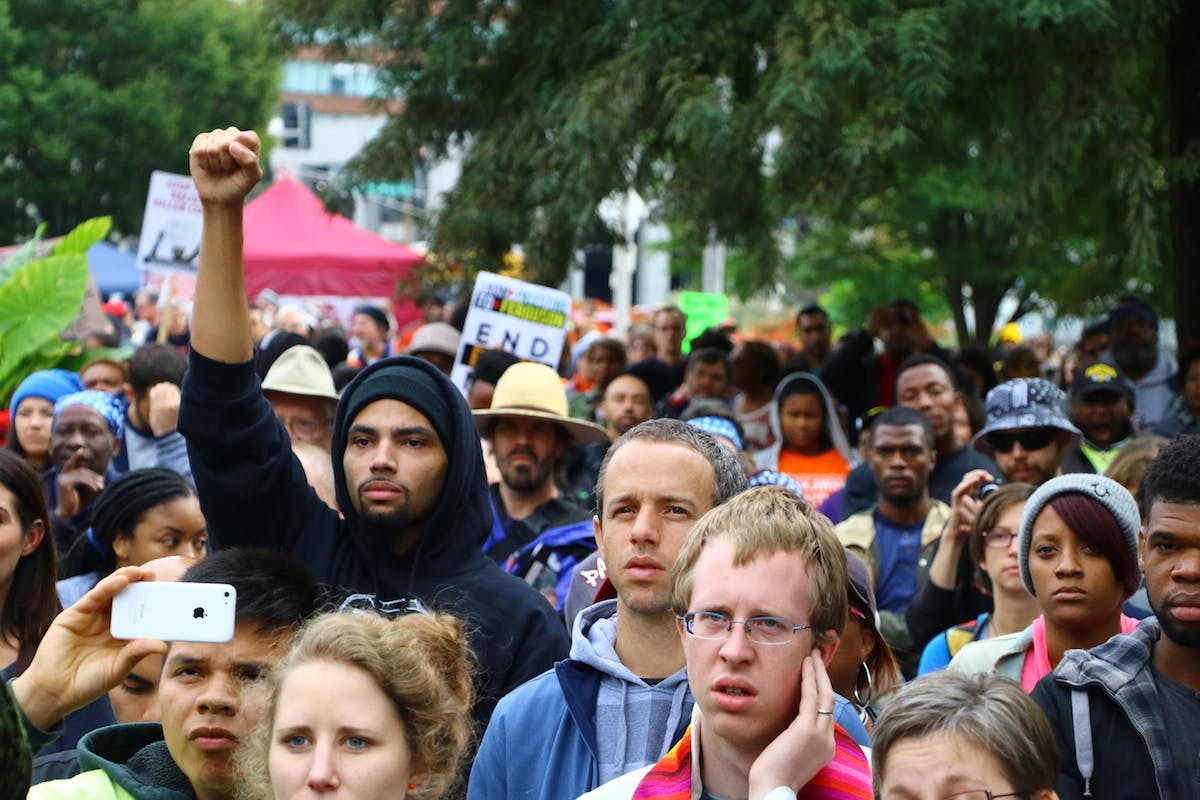 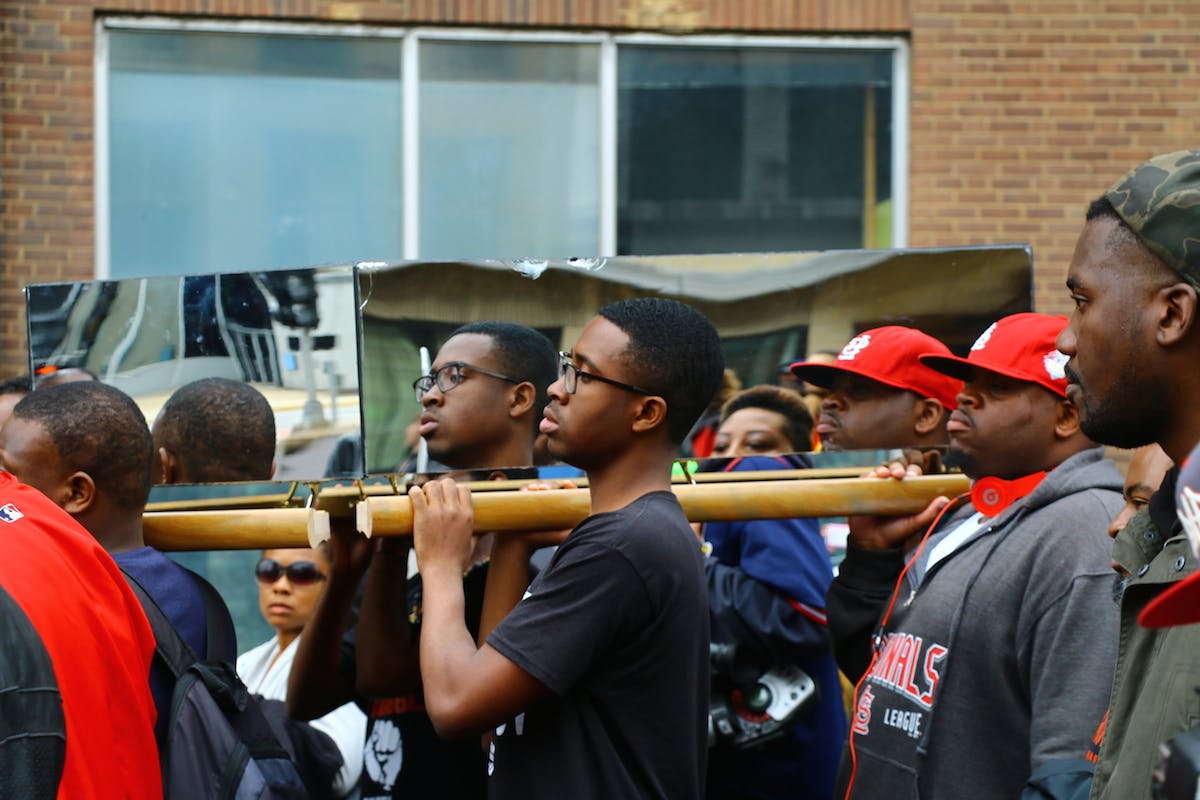 Saturday morning saw thousands flood downtown St. Louis for a rally with speakers on stage and a “Justice for All March” packing a major boulevard to police headquarters. Some in the crowd carried a mirrored coffin in deafening silence. The demonstrations reached their completion without incident.

Thankful to the organizers and crowd for keeping a cool head. If you don’t think this is a peaceful protest then you don’t effing get it.

The first arrests came on Saturday night, when numbers swelled to over a thousand, and protesters converged on a gas station to hold a peaceful sit-in, and four-and-a-half minutes of silence, one minute for each hour that Mike Brown’s body lay in the street before it was taken by the coroners.

Quik Trip was one of the shops that fell under the rage of the segregation-stale Missouri town’s residents. In the days following Mike Brown’s murder, the gas station was looted. But this time, protesters “wanted to show that we can come here and do a disciplined, non-violent civil disobedience action here,” Angel, a 19-year-old organizer in St. Louis, told the Daily Dot.

Riot police moved in and arrested 12 people from the sit-in just before police pushed the crowd to their feet using batons, pepper spray, and tear gas. Safe from the armored giants across the street, one of the organizers shot back from a megaphone: “You can pepper spray, you can throw your fucking tear gas, rubber bullets, real bullets, it don’t matter! We still gon’ fight for our cause.” 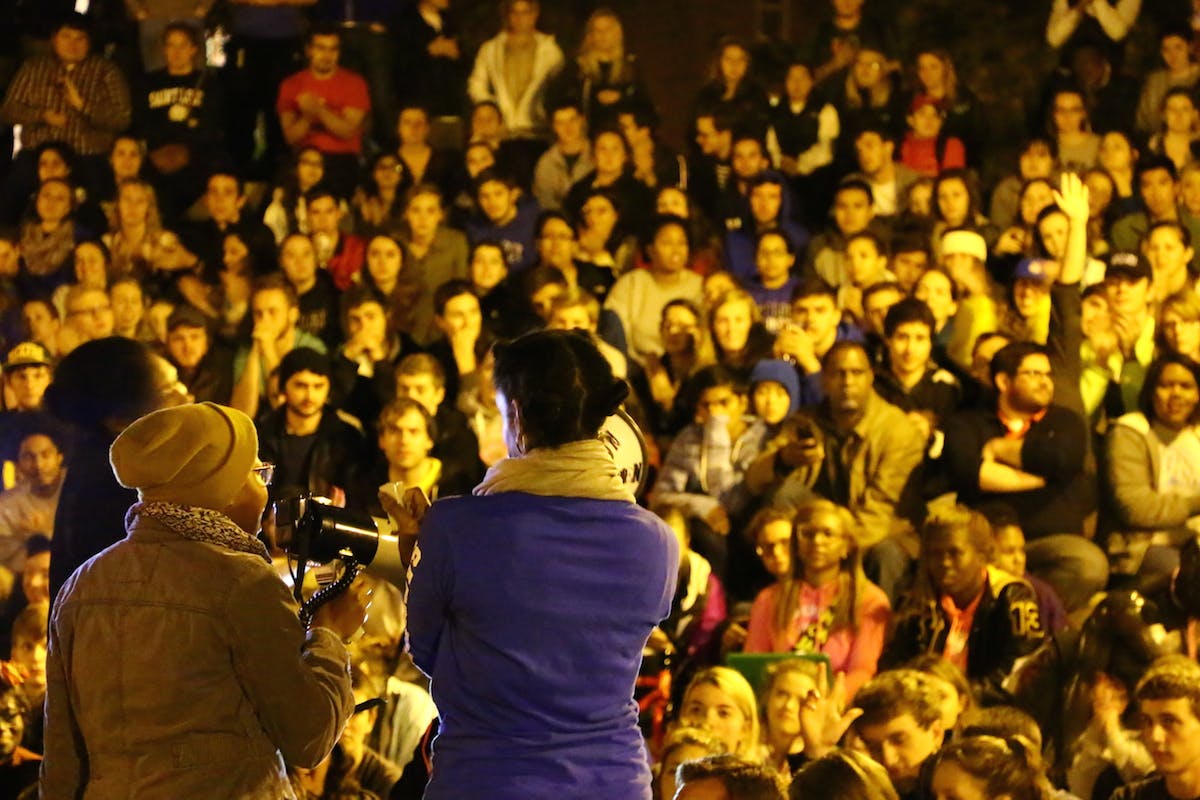 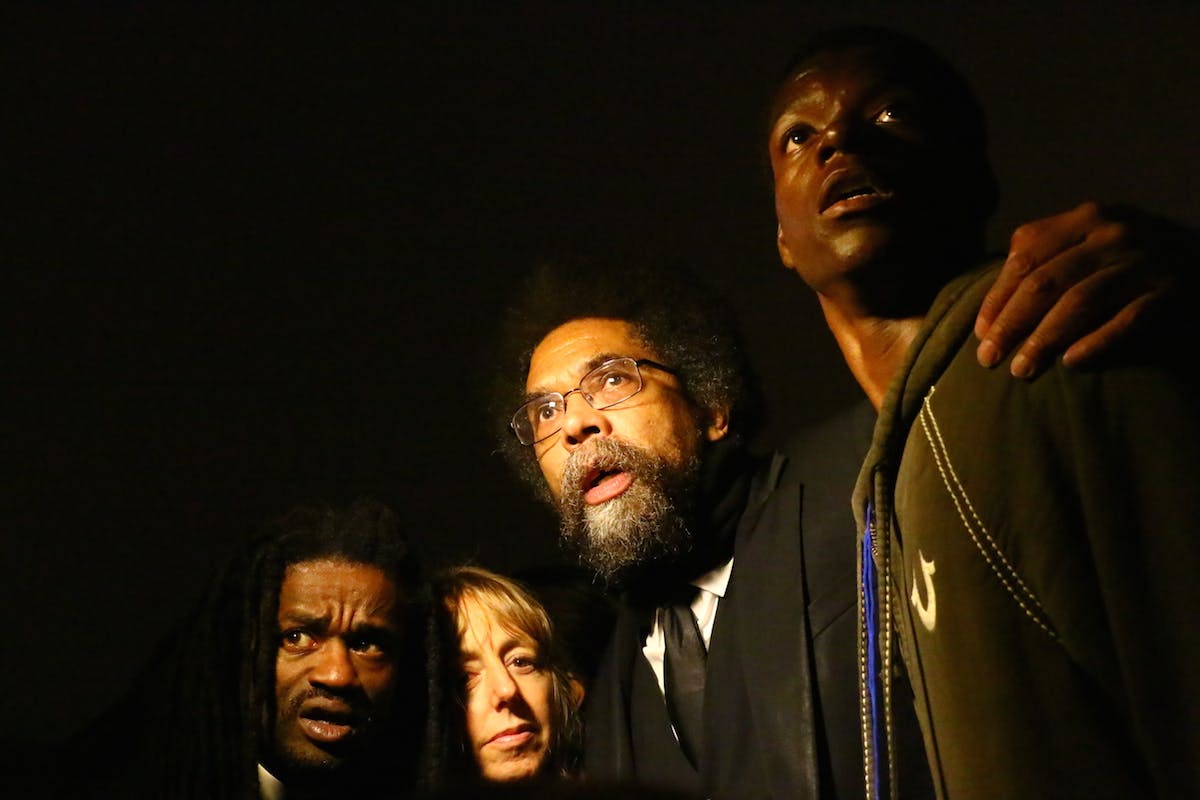 Protests reached their peak on Sunday as two different marches headed in different directions in a strategic move to split the police force’s numbers and before they reconverged at the campus of St. Louis University (SLU). Upon arrival, four minutes of dead silence were held for the four days since VonDerrit Myers had been killed. Even the gaggle of journalists put down their cameras and observed the heavy void. Then the crowd erupted in a cheer when a group of students announced with Ferguson October organizers that they would be occupying the space at the clock tower on the SLU quad.

As of Thursday, the encampment has held its ground for over 72 hours, and continued hosting contentious nightly discussions about racism and white privilege on their campus and in society.

On Monday, a coalition of faith leaders, including priests, rabbis, imams, and preachers marched in silence to Ferguson Police headquarters to read the names of people around the country gunned down by police, offering the Fergsuon officers “an invitation to repent and confess their sins.”

“God will forgive you but you must repent,” religious leaders of all faiths receiving “confessions” #MoralMonday pic.twitter.com/jmcejgxnEc 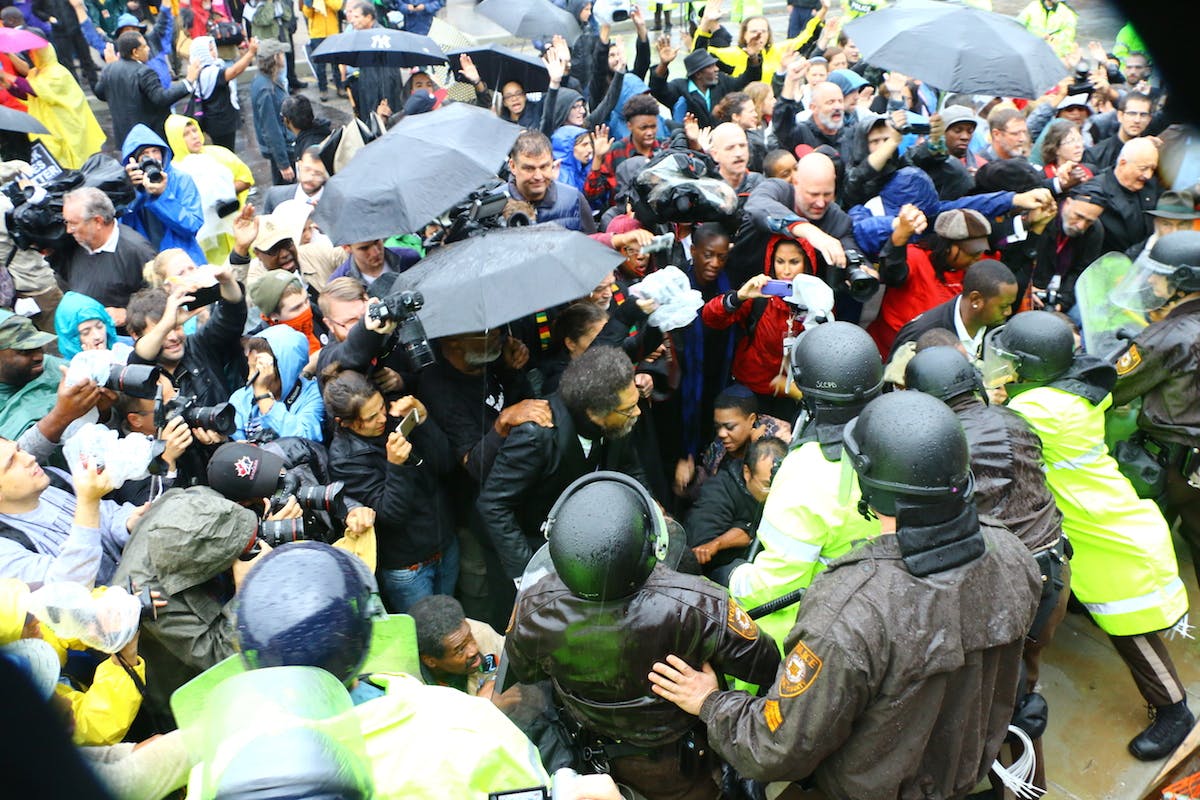 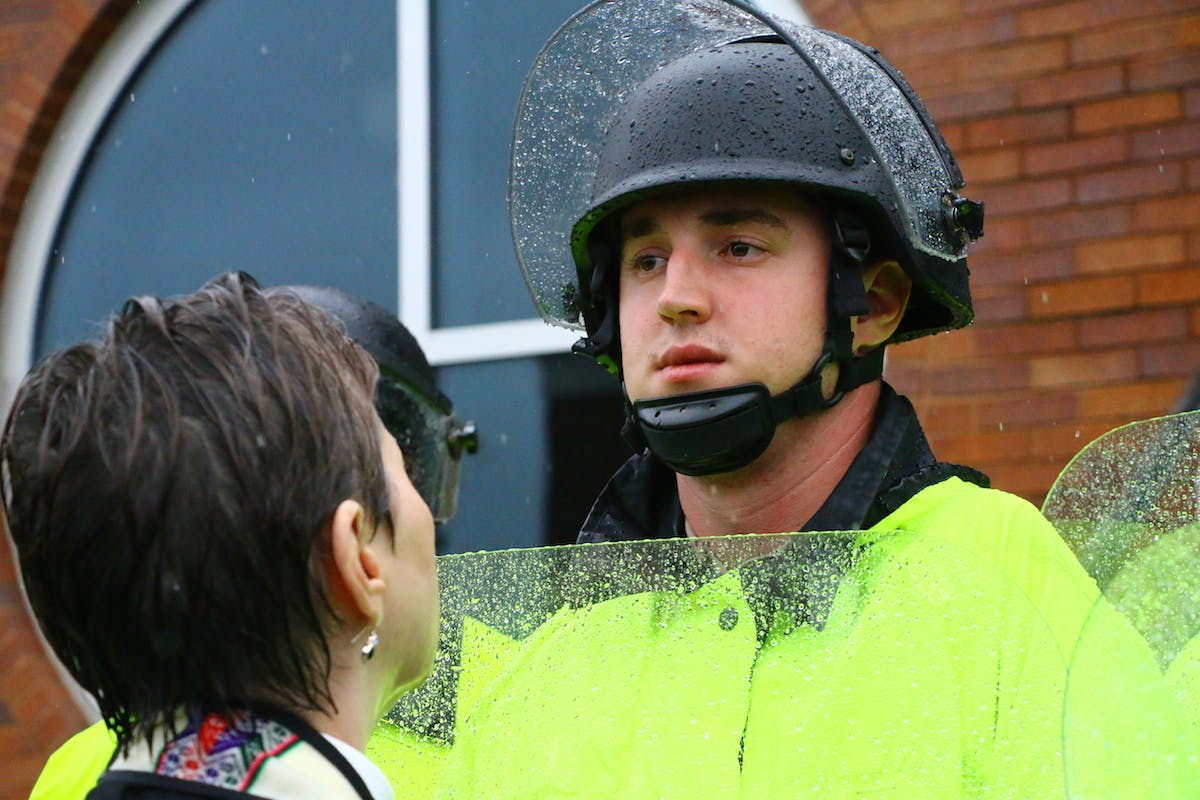 The invitation was largely performative, and none of the officers took up the faith leaders’ offer. Twenty three protesters and clergymembers, including Dr. Cornel West were arrested at the police station when they sat down at the front of the police line. The night before, speaking from a podium at SLU, Dr. West said: “It’s a beautiful thing to see people on fire for justice. I didn’t come here to give a speech, I came here to go to jail.”

The stifling irony of getting beaten back and arrested at growing demonstrations against police brutality further polarized the discussion in the mainstream media, pushing the (literally) black-and-white narrative and obscuring the message that the voices on the ground say the protests are really about.

SO MUCH of this police aggression could be reduced if the police would just stop arresting people and start talking to them. #Ferguson

“Not only are our voices not being heard in the media, but the police and the government aren’t listening to out screaming for justice,” said Josh, a St. Louis youth organizer, as he posed for pictures with Dr. West, Medea Benjamin, and Reverend Sekou at a march on Sunday night. 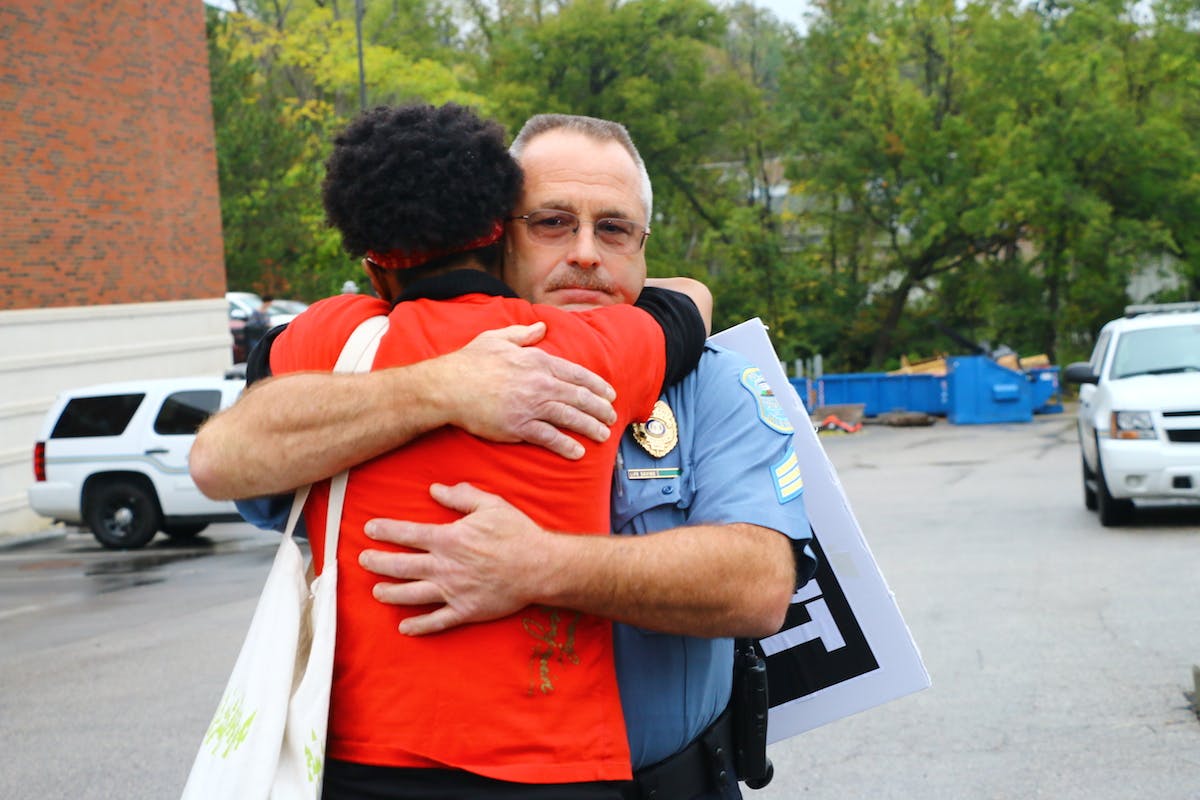 Protesters have also had to defend themselves against biting mainstream media coverage and backlash on social media. “They want to paint us as criminals, but let me make it clear: We are here to put and end to the systemic racism and police violence that are killing our youth,” said Monatgue Simmons, chair of the Organization for Black Struggle, which helped co-sponsor the Weekend of Resistance.

Why protest? Because ppl do what you let them. And killing black boys and damaging black bodies cannot continue. Because we won’t let them.

@tarek @shawncarrie at 42 yrs. Of age as long as I can remember everyday I have experienced some form of racism in the u.s . We r sick of it

The messaging of the movement remains a battle in the mediated sphere. Racists on Twitter started trolling the #ShawShooting hashtag, and it quickly got ugly:

I had a lot of questions about the ferguson shooting. Look forward to the report. The Shaw shooting? Not so much. Sounds like a clean kill.

When a nig shoots at u and he has 3 of his hood rats with him, 16 rounds ain’t shit. Just saying. #shawshooting

Niggers need to go home. The nig shot at the cop. Take your L and go back to mike brown protesting. Yall look embarrassing. #shawshooting

A troll called me a nigger. I blocked him & prayed for him #Ferguson

Yes because breaking into police cars and burning the flag is “peaceful protesting”. That kid deserved to get shot get over it #shawshooting

Nothing like reading the comments on flag burning threads to see some racist circle jerks . #shawshooting pic.twitter.com/VbmPoqktP2

Political skirmishes played out both online and in person about American flags carried upside-down, and some being burned. The topic became a hot point of discussion at the St. Louis University encampment, dubbed “OccupySLU.” Some were quick to stop the autonomous actions, which they said did not represent the majority of the protesters and “made our cause look bad,” while others cautioned against playing to the media and “getting caught up in respectability politics,” as protester Dashamelle Robinson put it. “The media use respectability politics to turn us into suspects rather than victims and invalidate the way we protest,” she said. “You can be pulled over or shot by a police whether you’re a straight-A student or a drug dealer, and all those black lives matter.”

“The upside down flag is actually a symbol of distress. It means there’s something seriously wrong in America that has to be fixed,” said Katherine Carroll, a sophomore at SLU.

Some present were upset by the burning flags, as were many more on Twitter, but others participating pointed out that they were making more of a rumpus about a lifeless flag than about the loss of black lives at the hands of police.  “Why are we talking about property damage when a human body was lying on the ground 4 hours?” asked Chloe Mason, an SLU senior. “That flag needs to be burned—you can make another flag, but you can’t bring back your child.”

#Ferguson #shawshooting #StLouis #missouri flag burners get the F out of #America YOU DON’T BURN THE STRIPES pic.twitter.com/FgJlvsM8uo

Burning American flags now like they do in the Middle East. If you don’t like it here then leave #shawshooting pic.twitter.com/3LGXAC75kC

You mad cause we burned it. We mad cause THEY KILLING US. Another flag can be bought. You can’t buy life back.

“That flag needs to be burned. You can make another flag, but you can’t bring back your child.” #FergusonOc… https://t.co/ZjlPY7MASH

Solidarity actions were simultaneously held in several cities across the country, including San Francisco and New York, whose citizens had turned out by the thousands during the Ferguson protests of last August.

In #LongIsland, @MaketheRoadNY is out BIG for #RespetoyDignidad, and in solidarity with Ferguson! #HandsUpDontShoot pic.twitter.com/x7OwBTbRDu


“I got my hands on my head—please don’t shoot me dead.”

According to its own data, in 2013, the Ferguson Police Department made 5,384 stops and 611 searches. Nearly 34 percent of the town’s 16,000 residents have been stopped by police, 86 percent of those stops and 92 percent of vehicle searches were executed against black people. This year, before unarmed Mike Brown was gunned down, there had not been a single murder.

Keith, a 61-year-old resident of Ferguson, told us how the death of Brown first escalated into a months-long fight between the people and police:

“Basically, this all got started because people were watching this body lay out there in the street for four-and-a-half hours. As the night progressed, I guess the police were tired of standing out there or whatever, they started name calling the residents, and they were calling names back, and the police chief got on this megaphone and told the TV cameras to turn all the cameras off—and when they finally did, he made the statement: ‘Why don’t you monkeys take your black asses home?’ And then from there, people just starting rioting, turning up the neighborhood. The police pretty much instigated it that first night.”

It remains to be seen if Ferguson’s indignant citizens can pivot from spontaneous rage and rebellion to building organization that can both harness their energy and include the most marginalized voices that have been some of the most radical and vociferous in catalyzing the protests.

Those who have taken it upon themselves to push the movement forward are trying. From the podium on the grand stage on Saturday, Tory Russell of Hands Up United spoke: “We had a bloody August, a rebellious September, and now we’re here. We’ve gotta go back to the hood, the projects, your school, your borough, and I’m gonna say it like Stokely Carmichael did: ‘We must organize, organize, and organize.’ “