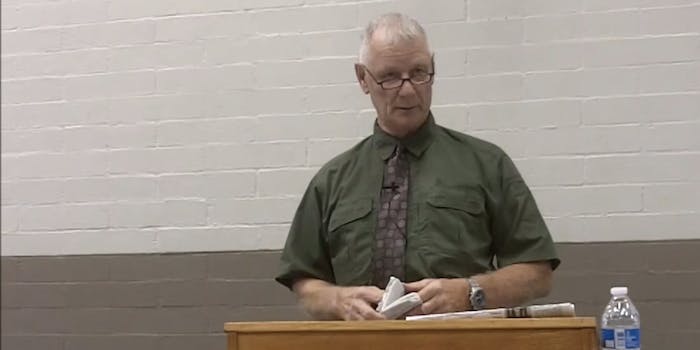 "As a police chief, it's embarrassing when you find out about this," St. Louis County Police Chief John Belmar said.

Another Missouri police officer faces internal investigation after being tied to an online rant about the people he’s tasked to serve.

In a video posted to YouTube in May, officer Dan Page gives a bizarre, rambling talk in front of a local chapter of Oathkeepers, a group of former and current law enforcement and military personnel that promises to obey the Constitution over direct orders. Page, who identifies himself as a St. Louis County police officer, has previously been seen on camera handling the ongoing protests in Ferguson, Mo., over 18-year-old Michael Brown, who was killed by officer Darren Wilson.

Page’s speech and subsequent Q&A, which clocks in just over an hour, begins with a history of the U.S. Constitution but quickly delves into promises of imminent national collapse, his theories of the Biblical apocalypse, and claims that he was told of the 9/11 attacks a month before they happened. Throughout, he peppers his rant with rails against “females who are not happy being women” and “sodomites,” and he repeatedly expresses a willingness to kill people.

It’s that last bit that’s particularly concerning to the county police department. Its media relations voicemail line is full and didn’t accept the Daily Dot’s call, but on Friday, Police Chief John Belmar described the video to CNN as “so bizarre,” and said he’d placed Page on administrative leave.

“As a police chief, it’s embarrassing when you find out about this,” Belmar said of Page. “It was uploaded in April, but I don’t do Facebook, I don’t surf YouTube.”

The video of Page is embedded below. In case you don’t have more than an hour to delve deep, we’ve provided a list of highlights.

Near the end of his talk, Page says he didn’t realize this was an Oathkeepers event; he thought he was speaking to a “church group.”